You are here:
System Builders News

My notebook's bigger than yours

Back in March of this year, UK system builder Novatech announced it would soon offer gaming notebooks featuring NVIDIA's GTX 280 GPU. In the end, the X80 GTX Extreme didn't make an appearance for another month, but now the GTX 280 products are coming thick and fast.

At the end of May Novatech launched the X90 - a beast that is essentially a Core i7 desktop crammed into a notebook form factor - and next week it expects to start shipping the X1.

Speaking exclusively to HEXUS.channel, Novatech commercial director Kriss Pomroy explained the differences between the two systems. "The X90 uses desktop components and is a classic ‘desktop replacement'," he said.

"The X1 uses mobile parts, so you get benefits on things like battery life." Apparently you can also select from a number of different backlighting schemes, as well as run two GTX 280s in SLI mode.

Pomroy explained that Novatech buys barebone notebooks from manufacturer Clevo and then builds them itself. "Clevo tends to first launch a very powerful version based on desktop technology." he said. 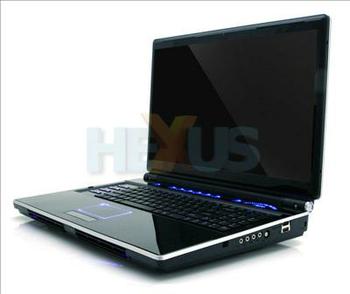