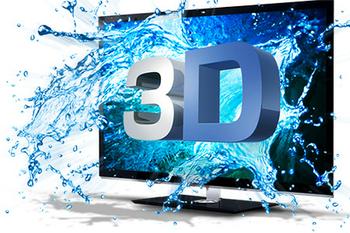 Remember when 3DTVs were all the rage? Having first invaded tech trade shows, 3D sets from all the major manufacturers soon infiltrated the local electronics shop before inevitably finding their way into our homes.

According to research firm DisplaySearch, 3DTV shipments have increased rapidly in recent years. A total of 41.5 million units were shipped last year, compared to just 24.1 million in 2011 and 2.3 million in 2010. Steady growth and promising signs for a 3D future, one would think, but apparently not, as 3DTV broadcasts are now in rapid decline.

Following on from ESPN's decision to close its one-and-only 3D sports channel, the BBC announced this week that it will 'indefinitely' suspend 3D programming "due to a lack of public appetite."

The omens aren't good, but will a decline in 3D content leave a sour taste in the mouths of those who have spent large sums on 3D-ready sets and the accompanying glasses? To find out, we're putting the question to you, our readers: did you ever buy a 3D TV? And if so, do you still consider it a good investment? Let us know in the comments below.

Posted by brasco - Fri 12 Jul 2013 16:49
Nope, I probably would have done had I not already bought a decent HDTV. But I doubt I'd be using the 3D on it much.
Posted by Jingee - Fri 12 Jul 2013 16:55
Got two Hanns.G 3D monitors (looking for a third but discontinued). Never used the 3D, but the 120hz for gaming is absolutely brilliant.
Posted by zaph0d - Fri 12 Jul 2013 17:02
Just recently got a 37“ LG with the Freesat HD Tuner built in, for £330 I thought why the hell not, my old 37”1080p was a real power drain @150w+, thisun uses only about 30w with a brighter picture and 3d to boot. Makes a difference in some games but I'm more looking forward to the retail Oculus Rift ^^
Posted by big_hairy_rob - Fri 12 Jul 2013 17:02
generally I have found or seen that 3d tvs are much clearer and “scan” much faster. I do not own one myself as I am not planning on upgrading my 36" CRT until something much larger is available for around a fair price, or it breaks. Until then I will just have to make do.
Posted by Nelviticus - Fri 12 Jul 2013 17:03
I bought a TV that had 3D, which is an important distinction. I've watched a few 3D things on it but unless the screen fills about 85% of your field of vision it's just not convincing. I'm not keen on sitting three feet from my telly to watch stuff.

When I do however, just to try things out, it can work really well depending on the content. Things like tennis in 3D are just different rather than better but some of the scenes in Dredd for instance look amazing in 3D. But you do have to be 3 feet away.