During the Tesla AI Day presentation, which completed a few hours ago, Elon Musk unveiled the Tesla Bot. The Tesla Bot is a humanoid robot, standing 1.72m tall, weighing in at 57kg, and able to move around at up to 8kmph. It is designed to be "friendly" and be adept at completing mundane or boring tasks for humans, as well as doing stuff that might be a bit risky for biological bipeds.

Tesla Bot segment starts at about 2 hours, 5 minutes and 15 seconds into the above video.

Tesla Bot contains as many as 40 actuators inside, the majority of which are to be found in the arms, legs, and hands. Musk said that the helpful robot was designed in this humanoid form to be more helpful to humans, with its hands at the same natural level as ours, and a screen on its head for useful information. 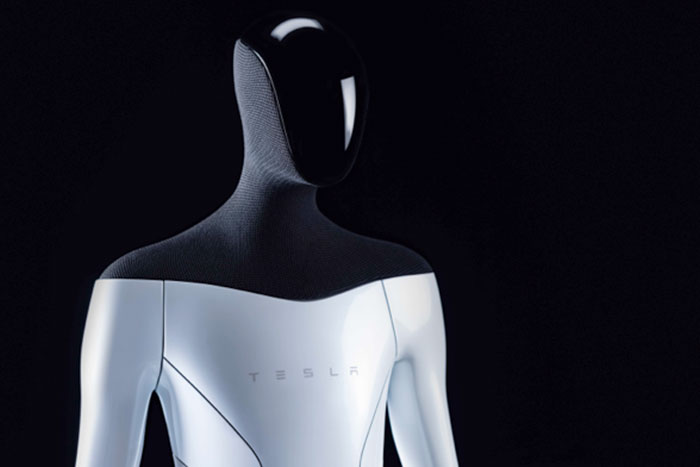 So, what kinds of loads might the Tesla Bot take off us? Spec sheets claim that Tesla Bot is capable of deadlifts up to 68kg, arm extended lifts of objects as heavy as 4.5kg, or carrying general stuff which weighs up to 20kg in total. During his presentation, Musk joked that as well as the Tesla Bot being friendly, you will probably easily be able to outrun it or overpower it.

As well as the actuators in place, giving the robot the power to walk, pick up, manipulate, and move stuff, there are plenty of other components and AI that are instrumental to making the Tesla Bot useful. For smarts the Tesla Bot uses AI built upon the firm's autonomous driving technology, and it features a multi-cam video neural networks, neural net planning, auto-labelling tech and more to navigate and make sense of commands and the environment.

Thanks to the mix of hardware and AI smarts Tesla Bot will be able to complete commands such as "Please pick up that bolt and attach it to the car with that wrench," complete many other menial/gofer tasks, and even go and buy groceries for the owner. Ultimately, thanks to developments like Tesla Bot, Musk reckons that economies will need a universal basic income, and physical labour will be a choice but not a necessity for citizens.

The first Tesla Bot prototypes are planned for 2022.

In related robotics news, on Tuesday, Boston Dynamics released a video showing its bipedal Atlas robots indulging in a bit or parkour, demonstrating 'whole-body athletic' skills. See the video below.

It is an all-in-one keyboard wedge home computer. A full kit with mouse etc costs $100.

But at least Musk has his Martain Labour Force all worked out.

EDIT - also noticed there appears to be a dead one on the floor in the background. So they can die…. or go flat.

But at least Musk has his Martain Labour Force all worked out.

EDIT - also noticed there appears to be a dead one on the floor in the background. So they can die…. or go flat.

Only able to carry 20Kg! I doubt it can do much to you other than give you a wedgy. Even being unfit and generally weedy I can carry that!