The most important camcorder you’ll read about this year, Sony’s HDR-FX1, looks almost as good as the shots it takes 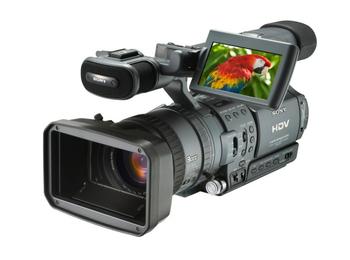 Introduction
The Sony HDR-FX1E is going to change the world. For decades, we’ve become used to seeing global events at a few hundred lines of resolution – unless we’re lucky enough to be there in person. It’s been a colourful view, but has left a lot to be desired in terms of detail. Now the end is nigh for a format that has been around since the 1950s. High definition has finally arrived in Europe, and Sony’s HDR-FX1E is in the vanguard.

As with so many things technological, the USA is already way ahead. JVC has had two HDV models on sale in the States for over a year, the GR-HD1 and JY-HD10, and they’re essentially consumer and professional versions of the same camcorder.

But the HD10 hasn’t arrived in Europe yet, and when the HD1 was brought over last year, it miraculously transformed itself into the PD1. This kept the novel single-CCD approach and progressive scanning, but had somehow managed to lose the 720-line HD mode that was the whole point of the camcorder in the first place.

So, Sony’s FX1E is the first semi-professional Pal HD camcorder to hit these shores. And, it doesn’t just offer the minor jump to 720 lines of JVC’s first models. Instead, it leaps to the top, using the highest resolution afforded by the new HDV format – 1,080 lines. That’s nearly twice as many lines as standard definition (SD) Pal, and representing a pixel resolution nearly four times as great as Pal’s.