You are here:
PS3 Features

Set in the lawless frontier of space, Starhawk is a fast-paced shooter that allows players to instantly alter the battlefield by calling down offensive and defensive structures in real-time from an orbiting drop ship, all while blasting away at enemies in the middle of huge single player or multiplayer fire-fights. As well as a single player campaign, Starhawk features 32 player battles online and an offline and online co-op mode.

Starhawk’s feature set begins with a host of weaponry and a multitude of vehicles for high-speed, extreme combat combined with vehicular warfare on both land and air. The game’s Build & Battle system lets players alter the action by giving them the ability to change the dynamics of the battlefield instantly with a selection of base structures at their disposal, all while in the midst of the fight. By the touch of a button players can deploy a number of buildings, vehicles, or artillery to strategically complete mission objectives and defeat enemies. 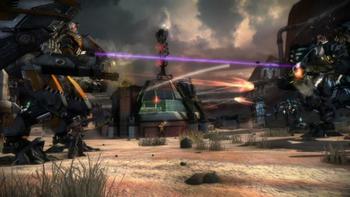 The Starhawk universe is set in the distant future, out in the far reaches of space where factions battle over a rare and dangerous resource known as Rift Energy. In this galaxy, colonies of humans, called Rifters, explore a scattering of planets, known as the Frontier, in attempt to mine this energy to make an honest living, but find their way of life threatened by the Outcast, a ruthless species of humans who have mutated into psychotic monsters due to exposure to this very same Rift Energy. Caught in the middle is Emmett Graves, a hired gunslinger ostracized from society because of his own exposure to Rift Energy, leaving him partially mutated, but still able to retain his humanity.