You are here:
Wii Features

As the sequel to Super Mario Galaxy, we can expect the gameplay in Super Mario Galaxy 2 to be very similar to the original with players traversing 3D planets, picking up power ups,and collecting starts on his search for the larger power stars

Mario will be able to ride the bipedal dinosaur Yoshi, who can use his tongue to swing across gaps, as well as eat different fruits that give him different powers, such as the ability to float with an "Air" timer and to run fast. According to the first trailer, the blue star cursor from Super Mario Galaxy has been replaced with a red dot, allowing the player to aim and control Yoshi's tongue. This could change as game's development progresses.

New items and features include:

* a drill that Mario can carry, allowing him to drill through dirt surfaces and entire planets, accessing new areas or attacking a boss's weakpoint
* a black-and-white switch that slows down time, meaning enemies and obstacles will move slowly
* a greater variety of plant models, and seemingly improved horizon, particle and cloud effects
* a shrunken Mario level similar to Tiny-Huge Island in Super Mario 64
* larger and more-open areas
* the pearl-colored Luma that allows Mario to "spin" has returned, and once again emerges from Mario's hat after he spins only to retreat within it again.

More info as we get it, but for now sit back and enjoy these latest screenshots: 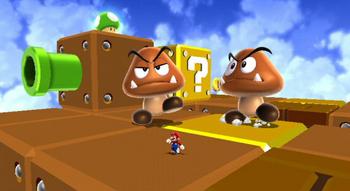 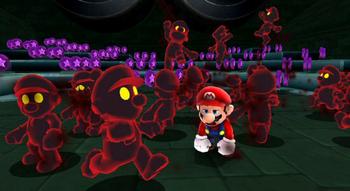 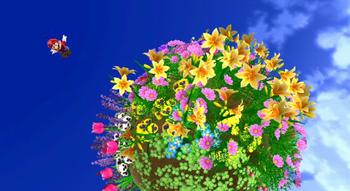 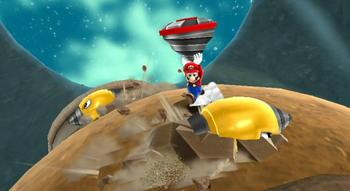