Not of the woolly variety

Courtesy of Brash Entertainment, we have a short Q&A with the developers regarding their upcoming movie spin-off, Jumper: Griffin's Story, an adventure based on a 2008 film starring Samuel L. Jackson, where people are able to teleport through space to anywhere in the world.

Tell us a little bit about Jumper: Griffin’s Story?
The Jumper game follows the character Griffin, who is a skilled jumper on a quest to avenge the death of his parents, an event that has shaped is life since he was child. The game story runs parallel to David’s (Hayden Christenson’s character) in the film and intersects at a few points – but in the game we learn even more about the Paladin organization, their mission and their history with Griffin.

What type of game play can gamers expect?
Jumper: Griffin’s Story introduces a new way to fight by introducing “jumping”, which will allow players to change locations within an environment in a split second. The game is heavily focused on combat, and being able to teleport and integrate this skill into combat is the key to what makes a jumper’s attacks so deadly. The player can move around the environment and surprise attack, as well as use chain attacks “bouncing back and forth” between enemies. This keeps adversaries constantly guessing. The player has the ability to strategically coordinate attacks on all sides of the opponent, using different attack buttons to perform specific combos. This is important because the Paladin’s heightened senses often allow them to anticipate moves milliseconds before the Jumper executes them. 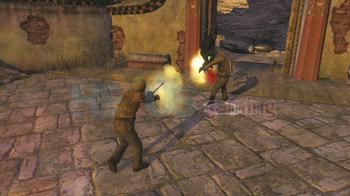 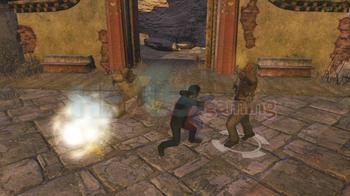 How will the player experience “Jumping “within the game?
At its essence, Jumper: Griffin’s Story is about being a Jumper and utilizing the skill of being able to teleport instantly in order to defeat your adversaries. There are three distinct types of jumps the player can employ – the combat jump, the traversal jump and the finisher jump. The combat jump is what the player uses the most throughout gameplay and allows players to jump around opponents during a fight sequence while simultaneously executing a series of devastating combos. The traversal jump allows the player to pick a point in the environment and jump to it instantly which is useful for both surprising and evading enemies. The finisher jump allows the player to jump enemies to completely new locations and leave them to their demise - which may be anything from a high altitude drop to dinner for a hungry beast. 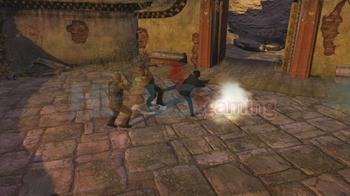 How will this game expand fans of the films experience?
The Jumper game is all about giving players the sensation of what it would be like to play the Jumper film as a completely interactive experience. Unlike a lot of sci-fi, the Jumper universe is based in reality so while special effects are inherent to the story, the approach to the visuals – in both the film and the game – is subtle with the focus is placed on the conflict between the Jumpers and Paladins.

In the game, the player will experience a very cinematic feel at every turn as well as a very distinct look and feel based on the unique aesthetic created by director Doug Liman. This combined with the rich fiction of Steven Gould’s books creates an excellent backdrop for a completely new and exciting universe. In introducing a completely new storyline, we have also introduced some new characters within the Paladin ranks. The player controls Griffin, but Roland and David, who appear in the film, also appear in the game.