With less than a month until Gears of War 3 arrives, Epic Games and Microsoft Studios have revealed the complete line-up of multiplayer maps, including the reveal of Gridlock, the revamped fan-favourite battleground returning from Gears of War and Gears of War 2.

Gears of War 3 will feature 10 maps based on campaign environments, all playable in Versus Multiplayer, Beast and Horde mode. Additionally, there will be a modified version of Gridlock, the legendary map that defined multiplayer gameplay in Gears 1 and Gears 2. Featuring graphical enhancements and new weapon spawns, the new Gridlock is set in the eerie darkness of night, forcing you to stay on your toes and work as a team as you stalk your opponents from the shadows.

Thanks to the participation and feedback of more than 1.2 million fans, Gears of War 3 also features improved versions of Old Town, Thrashball and Trenches from this spring’s public multiplayer beta. These maps have been enhanced based on player behaviour to offer a more balanced and enjoyable experience for veterans and rookies alike. For example, Trenches features a new combat area that significantly changes the dynamic of the fire-fights, and similar modifications have been made to Thrashball to better prevent spawn camping and level the playing field.

To further welcome newcomers to the Gears universe, Gears 3 will include a Casual Versus Multiplayer playlist where new players will have the option to compete against one another. Based on massive amounts of data and testing, Epic can detect certain gameplay benchmarks and skill levels to maintain a safe arena where beginners can hone their skills, have fun, and prepare for the more advanced skill level lobbies.

Here is the full list of maps in Gears of War 3, along with a description of each:

· Checkout – Checkout's combat takes place in the carcass of an abandoned superstore. The shop owners tried to move their inventory with a closeout sale in the weeks leading up to the HOD evacuations, but ultimately had to walk away and leave everything to time and history. The intense close-quarters combat of the store aisles makes every decision important. Weapon selection is key, cover is essential to survival and every move has an impact. When facing your enemy, remember what the sign says: “Everything must go.”

· Drydock – Much has been written about the beauty of Seran culture, but people often forget the backbone of industry upon which it all relies. This shipyard stands full of undelivered goods and the necessary tools of a society's infrastructure. Its most prominent landmark is the rotting husk of a cargo ship that will forever stand in Drydock. 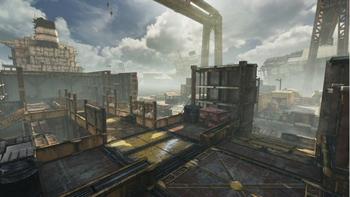 · Gridlock – This ashen street was once a bustling tourist destination known for its quaint inns and waterfront cafés. Even the water is gone now, replaced by the burnt shell of a crater that stands as a testament to the loss of Seran humanity.

· Hotel – Small island resorts such as this one catered to the opulent tastes of vacationing Serans. But as the Lambent infection spreads across the globe, tides are shifting to flood once popular beaches, and fierce winds batter and push at the walls of humanity's creations.

· Mercy – This area was once a bustling town square filled with people, but it never recovered from the UIR mortar shellings of the Pendulum Wars. Emergence soon followed, and the already heartbroken residents were shown no mercy by Locust forces, leading to an almost immediate evacuation. This large and open central square is surrounded on all sides by sheltered passageways and buildings. A raised dais yields powerful weaponry and a view of virtually everything within range, but the power located there must be hard-earned and well-protected to provide any lasting advantage.

· Old Town – Several remote areas of Sera managed to stave off the impact of Emergence for quite some time. Island towns such as this one were able to sustain themselves with small farms and a steady bounty from the ocean. But all good things must come to an end, and eventually they could hide no more. This is an excellent map for team-based play, with multiple areas that are well-suited to both attack and defence scenarios. A well-executed plan will often reap great rewards, and an enemy caught unaware can be flushed into a trap like a chicken free of its coop.

· Overpass – As the Lambent infection spreads across Sera, the planet is quite literally falling apart. And as the substrata beneath this forgotten overpass begin to disintegrate, the entire city block is collapsing along with it, sliding into a vast underground cavern. Head for the high ground or you just might slide along with it. Battles in this highly dynamic map often focus around the elevated Overpass, where teams can hole up and take advantage of the protected position and emplaced weaponry located there. But gaining the high ground can also be a trap, as the team left below will most assuredly use mortars and orbital lasers to regain their lost footing. 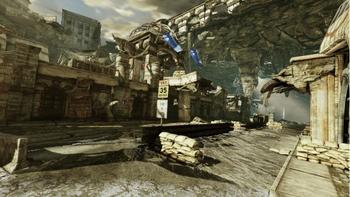 · Sandbar – This observation post once had a commanding view of the distant horizon. Never threatened, it was thought to be impenetrable due to its unpredictable coastline and the constant shifting of sandbars along the shallow water of the coastline. And it never did fall, it was simply abandoned when humanity fled from a threat that nobody could ever see coming.

· Thrashball – This stadium was once home to a different sort of national hero, one who fought for honour and glory, instead of scrambling for survival. The invigorating roar of the crowd has been replaced by the melancholy moaning of wind in the empty stadium seats. Stadium matches are no longer restricted to the playing field, and the team that controls the concession stands earns a great advantage. The scoreboard still keeps track of every point earned, but its frayed support cables also make it a precarious trap for anyone foolish enough to run underneath it.

· Trenches – The Locust have begun to carve mines and tunnels into the rocks of the Seran Deadlands, eking out any existence that resembles the underground passages of the Hollow they once called home. But this harsh environment is as relentless an d unforgiving as any enemy they've ever had to face. The Locust Trenches are small and tight, with clean lines of sight across virtually the entire battlefield. The central hill leads to a fortified bunker with a strategically important vantage point. Once taken, it is rarely surrendered, unless opposing forces can manage to sneak up under the cover of a passing sandstorm that leaves everyone blind for a short while. 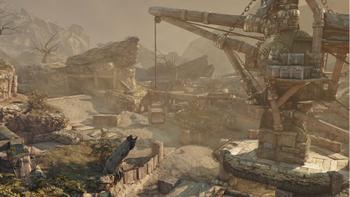