With its new title set to hit stores on October 14th, Konami has finally confirmed how PES 2012's online component has been overhauled to represent a true evolution of the series.

These new features have all been devised following extensive user feedback during the game’s development, and expand on the number of ways PES 2012 can be enjoyed.

The game’s Master League Online retains the competitive basis as users steer their club to glory against other like-mined users, but the popular option has been tailored to offer a more realistic experience. Team styles can now be altered to benefit the user’s favoured playing style, with options to choose from balanced play, physical, speed, technique, set-pieces and teamwork. The use of contract periods for players has also been introduced and players may have to be sold if their wage and improved contract demands cannot be met. Likewise, the fitness – even injuries – of players is more realistic, with more continuity between matches.

PES 2012 also now offers matches for up to eight people via the PlayStation 3, Xbox 360 and PC versions. To complement this, Community Mode has been improved to give users access to a wider range of opponents. Community groups of up to 100 users can be joined, and there are Bulletin Boards for members to pass on messages to each other. Similarly, inter-community matches have been incorporated to add rivalry between the groups. 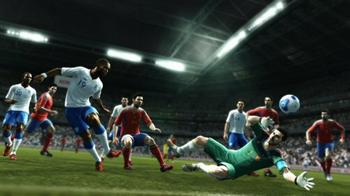 The general match-making elements of online play have also been overhauled. Players are now more likely to be pitched against a rival whose manner resembles their own. Those disconnecting to thwart a defeat will also be blocked from competitions and players with poor reputations will be pitted against one another and the whole PES 2012 online system has been enhanced to offer a smoother experience.

Facebook functionality has also been added in the form of myPES, a special tool that allows users to invite friends into bespoke leagues that will see match results being trackable via the myPES application. myPES is available as a free Facebook application when PES 2012 launches, and will enable users to share match results among friends via their Facebook walls. This service will then be extended in October, to allow people to invite friends into their own competitions, log their results and automatically update the league tables after online or offline matches among human players and unlock a range of special awards.

Finally, it all sounds like PES 2012 is heading in the right direction.