You are here:
Gamecube Press-Releases

Prepare for your close-up, as Viewtiful Joe: Red Hot Rumble takes you back to the movies in a bid to become the greatest action hero of all time! Do you have what it takes to help Joe make it onto the big screen? The movie industry is a cut-throat business and Joe has to battle his way to the top by any means necessary. Capcom is the developer and publisher of this game and Ninitendo of Europe is the Distributor. Viewtiful Joe: Red Hot Rumble launches across Europe on the Nintendo GameCube on 24th February 2006.

Unlike its predecessors, Viewtiful Joe: Red Hot Rumble is not a platform game, but is instead a fast paced and crazy multiplayer 'beat-em up'. Captain Blue has decided to retire and is looking for a successor to take over as the hero in his films. Joe and his rivals must battle it out on various film sets to prove they deserve to land this role.

In Viewtiful Joe: Red Hot Rumble, points mean prizes! Players must compete with their rivals over a series of exciting levels, securing points by completing the missions set. Most levels include up to four different missions, which range from defeating enemies against the clock, to collecting gems and defeating boss characters. Each mission follows on directly from the last giving the stages a hectic, fast-paced feel, with most missions taking under one minute to complete. As an added twist, players can steal points off their rivals by attacking them! 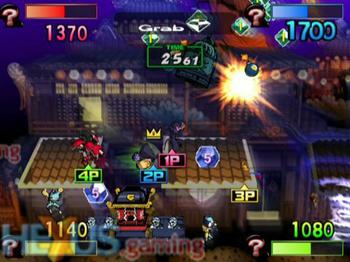 On top of their standard attack moves, players have another way to defeat their opponents in half the time! During the stages players can collect special VFX powers which when activated, allow them to slow down or freeze time, attack at mach speed and even use sonic attacks against their foes.

Every true hero needs a sidekick, so Viewtiful Joe: Red Hot Rumble lets you team up with a friend to tip the odds in your favour. Two players can team up and battle their way through the game's Story Mode in the first co-operative mode seen to date in the franchise.

The levels in Viewtiful Joe: Red Hot Rumble take place over a series of vivid, colourful and exciting movie themed back-drops. Players will experience the wild west in 'Midnight Shootout', fight on top of an aircraft against a giant dinosaur in 'King John Dogfight' and fight with their rivals as they fall from a high building in 'Sky-High Building Battle'.

The competition to become the next action hero will definitely be tough, with multiplayer action on offer for you and up to three friends. Players can select any one of the 25 stages unlocked in the game's Story Mode. Viewtiful Joe: Red Hot Rumble also features twelve playable characters, six of whom are only unlockable in Story Mode.

Viewtiful Joe: Red Hot Rumble takes the popular cel-shaded style of previous games and adds new and exciting 3D environments to give things an all-new twist. If you fancy a rumble in 2006, then this is definitely the game for you.

Viewtiful Joe: Red Hot Rumble launches on 24th February 2006 for the Nintendo GameCube at the estimated retail price of around £39.99.

17 'Most advanced gaming mouse ever' is a success on Kickstarter

Kickstarter project for 'The Z' by SwiftPoint has achieved $230k of pledges ($140k goal).

And for it to end with Bond shaking hands with all his 'dispatched' enemies in a hospital.