Originally intended to be developed for the Xbox back in 2003, the arcade style shoot ‘em up, beat ‘em up combo, The Red Star, is finally back on track and due to be released on April 6th. Don’t get too excited though folks, because it doesn’t look as though it will be worth the wait.

The Red Star is based on Christian Gossett’s graphic novel of the same name, set in sci-fi fantasy universe. The game is based on an alternative Russia, where the Red fleet has unleashed a devastating attack on the republic. The tale follows Sorceress Major Maya Antares and her faithful guardian, combat and weapons expert Kyuzo, who have devoted their lives to the service and defence of the United Republics of the Red Star. Under the command of Sky Marshall Urik Antares, Maya and Kyuzo have led the crew of the Skyfurnace Konstantinov through countless battles. But now, while entrenched in the war to control the rogue Republic of Nokgorka, Maya and Kyuzo meet a Resistance Fighter named Makita. This ferocious young warrior holds the key to a dark conspiracy that reveals the entire U.R.R.S. to be under the control of the Dark Lord Imbohl and his chief assassin, Troika, the Harvester of Souls.

The Red Star's comic book heritage isn’t enough to save what is quite frankly a dull, uninspiring side scrolling shoot ‘em up, where every idea has been borrowed from a dozen other games of the same ilk. If The Red Star was being released as an Xbox live arcade game at a price it is actually worthy of, around £3 at my estimation, then perhaps I’d talk about the game slightly differently, but the fact that it’s hitting retail at a whopping £20 is quite frankly ludicrous.

The game begins by giving you a choice of two playable warlords, with a further one to unlock when you progress. Each warlord has a different fighting skill, Kyuzo is a soldier with broad soldiers and a powerful punch, Makita is the agile and speedy rebel and Maya, once you unlock her, specialises in ranged sorcery. I had a brief play around with Makita and Kyuzo, but after playing through a chunk of the preview code with Kyuzo I totally lost any enthusiasm to continue more than I really needed to. I did give The Red Star a chance, but any game that makes me plough through dozens of clone baddies in such a repetitive manner and then, once I die in the final boss battle, decides to throw me back to the very beginning of the stage in order to do it all again doesn’t warrant any more gameplay hours than totally necessary. Just one small addition of a save option would have saved me from pulling my hair out. 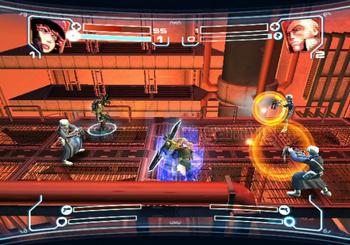 Okay, so let’s tell you about the game. The action begins by alerting you to an attack on the R.S.S. Konstantinov by the Red Fleet. The aim is to reach the ship before it’s destroyed by smashing and shooting your way through a number of futuristic looking mechs, that sport high tech weaponry and armour, and destroying hovering futuristic battleships and vehicles that shoot lasers which you have to dodge before shooting at their weak point in order to blast them to pieces.