Since its release on PlayStation 3 in October 2008, LittleBigPlanet has been credited with establishing the PLAY, CREATE, SHARE creative gaming genre by putting the powers of creation firmly in the players’ hands.

LittleBigPlanet is a unique experience that provides developer and user-generated levels and an engaging story to explore and play, a huge host of materials, tools, stickers, and more to create, and a robust set of online features for everyone to share these creations with each other via PlayStation Network. The original title has been widely praised with more than 80 industry awards worldwide, 15 of which have been for ‘Game of the Year’ categories, and the game’s stitched-together mascot, Sackboy, has broken through as the industry’s newest star—one that has resonated with every member of the family, young and old. Developed by the award-winning team at Media Molecule, the franchise to date has sold over four million units worldwide and the game continues to grow and evolve helped by on-going expansion through downloadable content and the support of countless fans around the globe who have uploaded over 2.5 million user-created levels to PlayStation Network since launch.

Now, that same creative team at Media Molecule is set to bring you LittleBigPlanet 2 for the PS3 early in 2011, providing fans a new means to PLAY, CREATE, and SHARE. It all begins with a brand new story mode that provides a reshaped world for Sackboy to explore and play. Each story level is influenced by cultural high points in history and is visually stunning when seen through the game’s revamped graphics engine. This franchise has always empowered players to create their own levels with the same tool set used by the development team. Therefore, LittleBigPlanet 2 will offer revolutionary gameplay mechanics and a level of customization and creative control that has never been seen before. With the implementation of a new CREATE mode, the tools have evolved to allow users to not only make better levels, but completely new games across multiple genres. 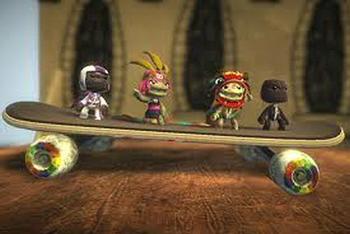