Now you’d think in this day and age of real-time strategy and real-time RPG combat, turn based combat RPGs would have no place in the world. I mean, even the DS can manage a decent RTS in Age of Empires: The Age of Kings, so where’s the appeal for Final Fantasy Tactics A2: Grimoire of the Rift? After all, this is as turn based as they come and, when you’re not in combat, is about as basic on the actual adventuring as you’ll find. All of which bodes for a less than exciting game, yes?

So why haven’t I been able to stop playing it then? This is something I’ve been wracking my brains over for the last two days and I’ve still yet to come up with anything better than it’s a lot of fun. Sorry, but that’s about it. Final Fantasy Tactics A2: Grimoire of the Rift has a strangely compelling hook for anyone who likes the odd dabble in turn based combat and it’s one of those games that you can dip into on the train or during the adverts then drop out back to the real world with no Legend of Zelda-style “What the hell was doing? Where am I ‘sposed to be going?” loss of storyline.

The non-combat areas of Final Fantasy Tactics A2: Grimoire of the Rift are pretty basic with most towns and villages, even cities with ‘streets thronging with people’, having just two places to visit, the pub and the shop. So that’s the needs of most bachelors taken care of right there. The shop is where you trade and buy stuff and the pub is where you pick up quests and accept various tasks for your clan.

There’s supposed to be somewhere in the region of 400 quests which will take even the most ardent gamer a good while to work through. The basic storyline is that your character is sucked into the land of Ivalice (maybe something to do with nits?) and you’re trying to find your way back. You join a clan, a team of freelance fighters, as they work their way through the world helping you to find the way home. 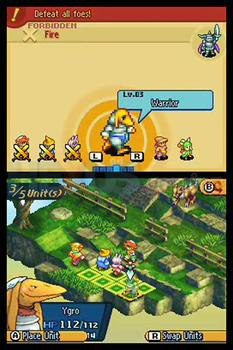 As you progress you can customize your clan, selecting new members for each battle, levelling them up and upgrading their and your gear from drops or by trading. Handily, even clan members you don’t use in battle still earn some experience points, meaning you don’t have to focus on a chosen few elite characters and can cherry pick clan members according to their skills and abilities. Even better, if you don’t like how your own character’s role is going, you can jump to another role and still take the abilities from your previous role with you. 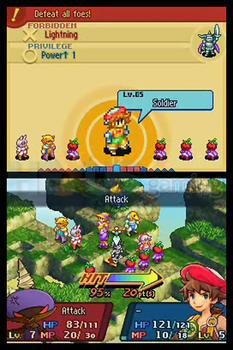 Now this being a DS game you’ll be automatically pulling the stylus out ready for some pointy-pokey action but I really wouldn’t bother. First off, the actual battles are in a 2D isometric view, there’s no spinny-round zoomy view here. Plus the actual battle area is pretty small, so much so that hitting the right square can be tricky and I guarantee that early on you accidentally fry a team-mate with an area attack and then compound the error by accidentally healing the enemy you were aiming at with the attack. So shove the stylus back in the slot and just stick to using the d-pad and buttons, k? 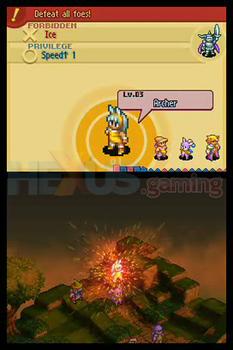