It hurts just as much as the original

Twenty-five years ago Konami launched its first Track And Field game on arcade and its simple, yet effective gameplay, based on quick, repeating, button presses, laid down the foundations for sequels and similar games in the genre.

New International Track & Field on Nintendo DS is essentially a re-make and an enhanced version of the arcade classic, albeit with the button-bashing of old tossed out in favour of a refined control system that takes advantage of the touch-screen and stylus.

The premise though is identical and with 24 disciplines on offer, including the 100 metre sprint, the javelin, pole-vault, triple jump, hurdles and the grueling 400 metres, Track And Field is hoping to catch the eye of all sports lovers over this Olympic summer.

The career mode is split into stages consisting of four events in each where you’re challenged to beat a qualifying record in order to progress. This may be a certain height, distance or speed depending on the event you’re competing in and if you rise to the challenge it unlocks the next event.

At the end of each discipline you’re presented with a leaderboard showing how you fare against the other competitors and at the end of the four events your overall position on the board determines whether you pick up a bronze, silver or gold medal. 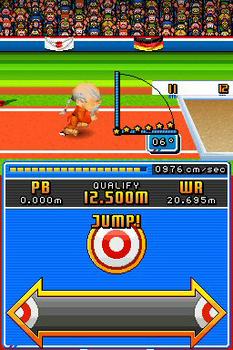 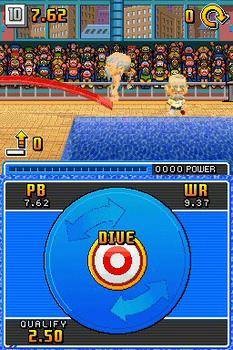 The original game on arcade and the subsequent versions on ZX Spectrum, Amstrad, Commodore 64 and many others besides had one overriding factor in common; the pain factor! If you hoped to get anywhere near to breaking any of the world records on display then you had to suffer through the rigorous and painful art of button-bashing. Despite there being no button-bashing in International Track & Field (unless you fancy switching over to Classic mode?), Konami has devised an alternate way to make us feel the strain. It works pretty well and certainly creates the retro feel of the original. I can feel those blisters forming already.

On the upper of the dual screens, the events on the track and field play out, whilst the bottom screen is used to run, jump, somersault, dive or carry out of number of different physical actions with the stylus. In many of the events running is required, so you need to rub your stylus back and forth furiously across a bar that runs along the bottom of the screen. After a dozen or so events it hurts, it really does.