30 years ago! That’s how long it’s been since those 2D pixelated alien dudes first invaded Planet Earth! Since then there has been numerous re-makes of the classic shooter, Space Invaders, but I’m hard pushed to think one that has been as brilliantly re-worked as Japanese developer Taito’s latest effort.

Space Invaders Extreme has still managed to retain the classic gameplay of the original, but also comes charging into its 30th anniversary year with an impressive new make-over that includes a thumping techno soundtrack, stimulating visuals and significant gameplay improvements that help no-end in improving on the foundations laid by its predecessor.

Elements from the past are all here. The pixelated graphics of the aliens haven’t changed that much and you still control a laser cannon that moves horizontally across the bottom of the screen as the aliens shift down ever closer to your impending doom. There’s still that UFO that darts across the top of the screen that if shot earns you some extra bonus points and there’s also a similar audio experience, the kind where you can’t help but play the game in time to the music as it speeds up and slows down in tandem with the gameplay.

However, unlike the original, there’s a huge degree of unpredictability in the gameplay as you have no idea how the aliens will react. The standard formations of the aliens from the classic Space Invaders no longer applies and in this 'Extreme' version they group together in tight formations, span out ready to attack from a wider angle, or they’ll bunch together taking different patterns, such as a pyramid shape. You just can’t second guess at the way they'll behave. 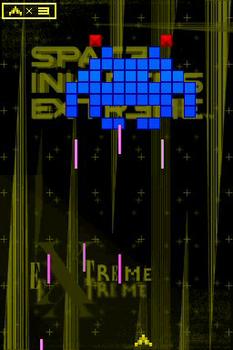 They also behave erratically, keeping you on your toes by dive-bombing, exploding, splitting into mini-invaders, launching bombs, unleashing triple-shots and utilising a range of alien weaponry.

They also vary in colour, style and size, which as well as providing some aesthetic variety, is extremely important if you hope to rack up some serious points and get yourself to the top of that global leader-board.

And points ladies and gents, is what Space Invaders Extreme is really all about…