Just as the Prince of Persia movie hits cinemas, Ubisoft unleashes a new Prince of Persia game for every system imaginable! So, to accompany the Xbox 360 review courtesy of Steven Williamson, comes a brief look at Prince of Persia: The Forgotten Sands for the Nintendo DS.

The story-line for The Forgotten Sands is a bit of a strange one. While its big screen brethren ties into the original plot-line of the Sands of Time trilogy, this version follows a slightly different route. The Prince awakens to discover he has been captured with both his powers and memories drained by an evil cult to resurrect a dark and mysterious entity, resulting in the imminent destruction of Persia. It is up to you as the Prince to battle through a plethora of levels aided only by a magical blade, infused with the soul of Razia a spirit that gives you time-altering powers.

Dragging the stylus across the screen moves the Prince in the desired direction, gets you climbing walls, jumping pits and clambering up poles etc. The controls are simple and intuitive, which is great for younger gamers as they can navigate the various obstacles and hazards with ease but for the older generation they just don't do this game any justice at all. It feels as though you're just dragging the poor Prince helplessly across the screen while he does all the work. More often than not, I found the naughty Prince completely ignoring my uber stylus dragging skills and vouching for a buzzsaw-induced dissection or plummeting into the nearest spike-laden pit instead; it got quite frustrating towards the end let me tell you! 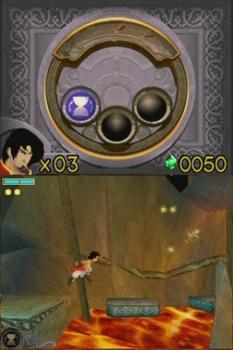