It doesn't really matter which of the three Professor Layton games you play, if you like puzzles you're guaranteed to be be entertained. With millions of copies already sold across the world, it’s no surprise that the latest game in the series, Professor Layton And The Lost Future, takes exactly the same format as previous titles with dozens of well-thought out, entertaining puzzles and a brand new mystery to solve.

A plot full of twists and turns...
The London we know and love has been thrown into absolute chaos. The Prime Minister has disappeared after agreeing to take part in a time machine experiment and Professor Layton’s side-kick Luke has received a letter seemingly from his future self urging the pair to head to an old clock shop tucked away among the back alleys of the city.

A number of scientists have also vanished without trace and Professor Layton and Luke find themselves wrapped up in a bizarre, time-shifting mystery where things aren’t quite what they seem. Bizarrely, the puzzle solving duo now find themselves ten years in the future where London and its inhabitants have changed dramatically in the blink of an eye.

Professor Layton And The Lost Future offers the strongest story in the series thus far, compelling from the out-set and shrouded in mystery with plenty of unexpected twists and turns along the way. Throughout the adventure there are many interesting characters to meet and converse with, plus dozens of well produced, animated cut-scenes that build on the storyline impressively. Predictably, the core gameplay is still all about the puzzles, but The Lost Future also manages to grip you from the outset with the mysterious tale, which unravels slowly as you progress teasing you with just enough information at key points in the game to keep you hooked. 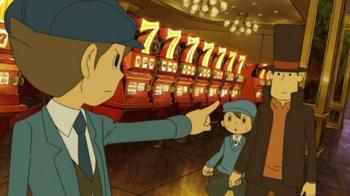