Being a fan of Lego Star Wars: The Complete Saga I was delighted to have the opportunity to review the latest game from the Traveller’s Tales camp, especially when that game in question features a childhood hero of mine; the fedora-wearing adventurer, Mr. Indiana Jones.

With Traveller’s Tales penchant for injecting irony and humour into its games, something which it did superbly in LEGO Star Wars, it bodes well for a title that features the storylines and excerpts from the first three, tongue-in-cheek Indiana Jones’ films.

In terms of comedy value though, LEGO Indiana Jones: The Original Adventure doesn’t quite make the grade. The humour that I’d expected from the developer is evident only in small doses and having already played through, loved, and laughed-out-loud whilst playing LEGO: Star Wars last year, I was expecting much more comedy value from a game that certainly has far more funny moments on screen then that of George Lucas’s sci-fi adventure.

Whilst it’s true that the iconic and instantly familiar scenes from Star Wars must have helped to convey the humour and the irony intended by the developer, in LEGO Indy some attempts at tickling your funny bone will almost certainly go straight over your head. 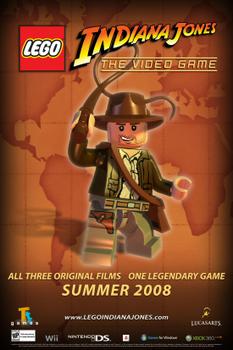 Nevertheless, there are still a few shoulder-shaking moments that come courtesy of some well produced and visually engaging cut-scenes, such as when Indiana Jones offers C3P0’s head and then a rubber duck to his enemy Belloq instead of the golden idol he’s just retrieved from an ancient temple (Raiders of the Lost Ark). 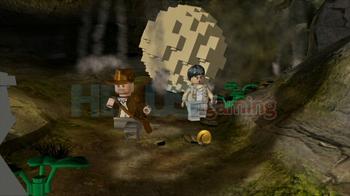 Humour aside, the game-play in Indiana Jones is certainly as entertaining as I’d expected. With dozens of characters to unlock (all of which offer a wide range of entertaining abilities), stimulating logical puzzles to solve, superb level design – which boasts a healthy amount of freedom to explore - and oodles of collectibles to hunt for (appeasing any obsessive gamers), there’s plenty to do, tons of replay value and an ample amount of variety in the game-play.

The environments, which include underground caves, jungles, rivers, snow-capped mountains and many indoor locations are richly detailed with plenty of destructible objects that you can smash into tiny smithereens with your hands, whip or pistol. There are also 50+ characters that you can play with, including Marcus Brody and Mola Ram, meaning that there’s plenty of diversity in the way you can tackle the adventure.