50 years after the events of the original Red Faction

What’s it about?
Red Faction Guerrilla is a sci-fi themed, sandbox adventure and the third game in the explosive Red Faction series. The original title introduced GeoMod technology, a powerful new engine that opened up the gameplay by allowing gamers to blast holes in the ground and smash through walls.

In Red Faction Guerrilla you play as Alec Mason, a mining engineer who joins the Red Faction movement as they battle for freedom against the corrupt Earth Defensive Force (EDF.) Ruling the planet by force, the EDF has taken to kidnapping settlers and forcing them into labour camps. With advanced knowledge of explosive devices, it's up to you to boost civilian morale, destroy important EDF buildings, wipe out the oppressing faction and gain territorial control. Typical to many other sandbox games, such as the GTA series, Red Faction Guerrilla involves completing set missions and objectives across an open world-environment. The difference with this third person shooter is that you have the power to take down huge structures and destroy whole enemy convoys with just one press of your detonator. Kaboom!

Red Faction Guerrilla features a standard set of mission types, including assault, defend, escort and search and destroy objectives. The in-game currently is scrap metal that you find lying around or you get from smashing objects with your sledgehammer; and that can be used to purchase upgrades and better weapons to help you in your fight.

The game also incorporates a morale based system, so your actions affect the way that the Red Faction or the EDF respond to you. By knocking down strategic points you can boost morale and you’ll have insurgents join you in the battle. Ignore enemy out-posts and you’ll find yourself outnumbered heavily by enemy forces. It’s up to you how you wish to play Red Faction Guerrilla, it caters for both the tactical minded and those looking for instant pick-up-and-play appeal. The main emphasis, however, is on destruction as you seek to bring any EDF building or structure crashing to the ground.

Played from the third person perspective, Red Faction Guerrilla features a lengthy campaign mode (approx 15-20 hours) and an offline mode called ‘Wrecking Crew’ that showcases the GeoMod 2 technology. Finally, there’s a multiplayer mode accessed via the Games for Windows live service that hosts 16 players. With six game modes and 21 maps to choose from, Red Faction Guerrilla certainly isn’t lacking in terms of content. How does it play though? 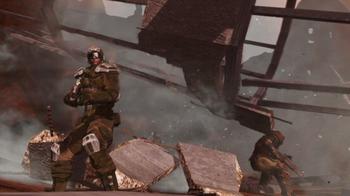