Three years ago, Supreme Commander gave the RTS world a shot in the arm with its immensely detailed economic system, interoperable full-3D and tactical viewpoints and hard-to-obtain but game-changing “experimental” super-units. Swathes of generic strategies were swatted aside as gamers flocked to find out what all the fuss was about – but it was polarising to say the least… for every fanatic, there were far more who found it too involved and gave up. Recognising this, Gas Powered Games have acquiesced, reducing the complexity in the hope of reaching out to a wider audience.

Sending a fighter over to the enemy base on scouting duties, you’ll notice an invasion force of tanks with protective armour boosters and anti-air units preparing to head down the coast and attack you. Having focussed all your efforts on constructing an experimental, your defences aren’t up to the task. Quickly, you invest your hard-earned research points in a powerful battleship, rush to the shipyard, prepare two for combat, and put them on a course to intercept. The hapless coastal invasion force is equipped with little long range weaponry, and is soon decimated by the battleships’ enormous missile batteries. In retaliation, you send your experimental giant robot in the opposite direction, supported by your now-experienced battleships. Just as you close in to the enemy base, destroying all defences in your path with the experimental’s gigantic laser, you suddenly discover that you’d missed their gigantic flying saucer – but by now it’s inside your base… with no anti-air and no time to react, your Armoured Command Unit (ACU) is taking heavy fire. It’s too late to save it – did you research the ACU upgrade to keep its nuclear core stable? As the enormous mushroom cloud rips through your base, you recall that you’d spent the points researching the battleships instead. It’s certainly all-action, and if you’re in the midst of an exciting and challenging game then it’s extremely engrossing and a lot of fun to play. 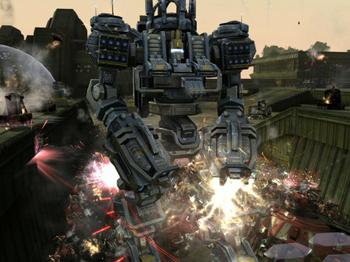 Click for larger image
That however, won’t be how you’re introduced to the game. Supreme Commander 2 doesn’t have a particularly detailed manual, and it transpires fairly rapidly that the mission-based campaign serves as a tutorial. After a few basic instructions on how to move units, construct buildings, and avoid treading on innocent civilians in your ACU, you’re hurled straight into the captivating rollercoaster that is the United Earth Federation campaign. Except it’s neither of those things. The missions are heavily restricted, with fixed, regimented environments and consequently only one or two viable tactics, and the player is further shoehorned with limited research options. Presumably designed to break the casual audience into the tech tree gently, before slowly ramping up to the full tree at the end of the campaign, at first glance this isn’t such a bad thing. When you advance onto the Illuminate missions however, only to see your tree restricted again, and a first mission easily completed with a single bank of anti-tank and anti-air guns, it becomes extremely frustrating. Admittedly, there are some small differences between the factions’ tech trees, and some variation between each faction’s units, but is it really necessary to spoon-feed the player to such an extent? If this was just a brief tutorial, then it would make perfect sense – but it isn’t. It’s the sole scripted single-player experience – 6 hours of play for each of the three factions if you take things slowly – and its sole purpose appears to be a lesson in how the factions differ.