For starters you get 10 new characters, who debuted in the SSFIV console edition, though eight of those have already appeared in previous games including Makoto from Street Fighter III and Adon from the original Street Fighter. The two brand new additions are Juri, a young South Korean female Taekwondo fighter and Hakan the larger than life Turkish oil wrestler. Then there’s another four new characters (new to the Arcade Edition): Evil Ryu, Oni, Yun, and Yang. Each harnesses a new special attack and some typically-bold and colourful ass-kicking animation. Indeed, every character in the game has been fine tuned since Street Fighter IV and the online component has been totally revamped with some brand new game modes to complement the obligatory 1 vs. 1 tournament scrap. 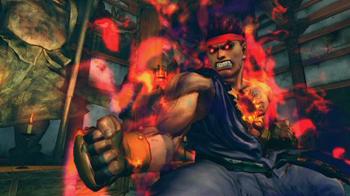 Super Street Fighter IV Arcade Edition features a mix of returning characters, including series stalwarts such as Ryu, Ken, Chun-Li and Guile. These familiar old faces pack a punch alongside the likes of relative newcomers Crimson Viper, Rufus and Abel. Characters and environments are once again rendered in high definition 3D, while the game is played in the classic Street Fighter 2D perspective with additional 3D camera flourishes. Visually, it’s Street Fighter as you know and love it, though this enhanced PC version is most definitely the best looking version we’ve seen.

Alongside traditional ranked and unranked matches, you can battle online against other players in the likes of 8 player team battles or the Endless Battle mode, where the winner fights against a rotating group of up to 8 players. And, as if you need to be shown how distinctively average your button-mashing skills actually are, there’s also the option to watch replays of some of the best online scraps. Dubbed the "Elite Channel," you can choose to watch the best of the best - those people who achieve stupidly high scores - or you can opt to follow up to 5 separate players of your choice.