You are here:
PS Vita Reviews

A new era of handheld gaming?

Lukewarm reviews, complaints of system crashes and reports of unresponsive touchscreens from the Japanese launch of PlayStation Vita haven't instilled me with much confidence for the handheld's UK arrival. But finally, the wait is over, and I can now finally judge the £200 Vita for myself.

At first glance, there doesn't seem to be too many differences between the new Vita and the old PlayStation Portable, other than the dual-analogue sticks sitting either side of the 5in OLED touchscreen and the noticeably smaller action buttons. But this couldn't actually be further from the truth. The fact is Vita is to PSP what PS3 is to PS2; a forward-looking evolution that makes the predecessor seem positively ancient in comparison.

Vita is powered by a quad-core ARM Cortex-A9 MPCore processor that's capable of clock speeds of up to 2GHz, which probably explains why the system's fully-charged 7V 2200mAh battery typically lasts a little over three hours with moderate use.

While playing Uncharted: Golden Abyss, I clocked battery life at just two hours and 45 minutes before the system shut down. Charging times are much more impressive though, taking approximately one hour and 15 minutes until the battery icon indicated Vita was full to the brim.

I've therefore spent most of my Vita experience with the unit plugged into a wall socket so that I needn't worry about the battery icon draining rather too quickly. It's a bit disappointing that gaming on my Xperia PLAY smartphone outlasts this dedicated gaming device, but it's not an issue that's likely to ruin experiences, unless the games don't live up to expectations; though it does, of course, make it less useful for long journeys. 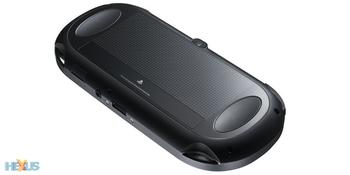 What it lacks in battery potency, Vita makes up for in power, with a quad-core SGX543MP4+ GPU, the plus indicating that it's been modified specifically for Sony's device. The chip offers some serious mobile graphics power, and you only need to spend five minutes checking out the quality and performance of Sony's flagship launch game - Uncharted: Golden Abyss - on the 960x544-pixel screen to witness this impressive new benchmark in handheld gaming.

It also comes equipped with 512MB of RAM, compared to the paltry 64MB of the PSPgo, and is backed up with 128MB of VRAM to ensure you can move between the features of the PS Vita quickly, to multi-task, chat, game and watch videos.

Using some of Vita's power is the Sixaxis motion-sensing system (three-axis gyroscope, three-axis accelerometer), multi-touch display and a rear touchpad that should, in theory, deliver a new kind of gaming experience.

Has Vita got the looks?

On the front of Vita, to the left of the screen, sits the d-pad, left analogue stick and the PlayStation Home button. The multi-directional d-pad makes a slight clicking sound as you move it around with the tip of your thumb, while the analogue stick rotates extremely smoothly and silently; though is smaller than I had previously imagined it to be - it's almost exactly the same size as the original PSP's awkward analogue stick, but more prominently raised.

The Home button is sunk into the chassis of the Vita unit, which is a deliberate design decision that ensures you don't accidentally press it. The same applies to the Start and Select buttons, situated on the right-hand side of the unit, which are impossible to press when your fingertips are flat on the unit but can be pushed with ease when you raise your digit at an angle, if you catch my drift.

On the right-hand side of Vita's display sits a small 1.3-megapixel camera. The four action buttons are also very small, packed fairly close together and require a little bit of force to activate, which ensures you don't accidentally knock the wrong button by mistake.

While holding the Vita in two hands, my left and right thumbs rest perfectly on the d-pad and action buttons, respectively, ensuring that I can easily move the analogue sticks and access all the buttons on the controller with very little lateral movement. Design-wise, I think the layout couldn't be better or more comfortable.

The large rectangular screen of Vita is set off nicely against the rounded edges of the unit, as are the two table tennis paddle-shaped panels that host the d-pad and analogue stick on the left, and the action button and analogue stick on the right. The left and right bumpers on the top of the unit also blend into the design nicely with their curved shape. The fact that the bumpers hardly make any noise at all and feel soft to touch when pressed is a bonus.

On the base of the Vita sits the port for the AC adapter and a headphone jack. Vita makes use of a USB charging cable, so it's easy to recharge the internal battery from other devices (a PC or PS3, for example) or from the bundled mains AC Adapter. There is one thing worth noting though, which may save you a phone call to Sony customer services, complaining that the Vita has bricked when it hasn't.