Kingdom Hearts II is the sequel to Square Enix and Disney’s successful Kingdom Hearts where three friends, Riku, Sora and Kairi (who were once living in paradise) were split up just before they were about to take to the seas and explore the world. As the main character, Sora, your task was to travel on a journey through magical kingdoms such as Peter Pan’s Neverland, Wonderland and Tarzan’s deep jungle in a search for his missing friends. The blend of Disney's animated characters and films coupled with characters from Square's Final Fantasy RPG series was an instant hit that captured the imagination of both children and adults.

Kingdom Hearts II follows on from the previous adventure in a 3D role-playing game where the developer’s imagination runs wild once again by creating a colourful and totally mesmerising story. The game is a mixture of combat, interaction and mini-games as you travel across many of the Disney worlds including the Beast’s castle (from Beauty and the Beast) Port Royal (from Pirates of the Caribbean) and Halloween Town (from the Nightmare before Christmas). You’re probably thinking at this point that Kingdom Hearts II will only appeal to children, but you’re wrong. We’ve played it in one 8 hour stint and we’re over 30. The fact is, Kingdom Hearts II brings out the big kid in you and leaves you all warm and tingly inside. 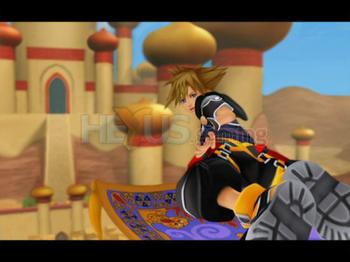 Kingdom Hearts II takes you on an enchanting, magical journey that captures your imagination in so many different ways. The story-line is a major part of the game and told through numerous cut-scenes. The game runs at a fairly slow pace to incorporate the charming fairytale, but in many games we’ll skip scenes to get onto the action because the story is so dull, in Kingdom Hearts II however it’s the story, the way it’s told and its amazing characters that make the game so special. The story and the great visual effects manage to portray each character in a way where it’s hard not to feel some empathy towards them. The world that is created is obviously an imaginary one, but such is its charm we wished we could jump through a portal and join these folk on their amazing adventure, even if it were just to sit with Sora and his friends sucking on an ice blue lolly talking about pretzels and watermelons, or wandering around the magical Disney castle bumping into the likes of Minnie Mouse and Daisy Duck as if it were an everyday occurrence. 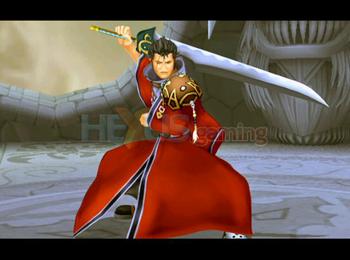 We’re in no doubt that it’s the story, design of the characters and the world, the understated classical music that plays in the background (which gathers pace and then softens in just the right places) that makes Kingdom Hearts II one of the best gaming experiences of the year for this genre. The actual gameplay is not remarkable in any way and certainly has its faults, but the small errors that do creep in can be totally forgiven due to the grandeur and style of the presentation and characters; even bashing buttons is handled in such a way that you’ll want to do it again and again.