Wii may have become the premiere destination for all controller-waggling, multiplayer-focused family-friendly games over the past few years, but now there’s a new contender on the block vying for a slice of the party gaming pie. With the launch of Sony’s new motion-sensing controller for the PS3 comes Start The Party, the first ever augmented reality game to use 1:1 motion tracking and place you right in the middle of the game.

Start The Party is a set of casual, party games with the emphasis being on having fun. Thanks to the PlayStation Eye Camera you appear on screen in the midst of some colourful environments as you take part in such strange tasks as brushing a crocodile's teeth and wacking moles back into their holes. The twist here is that the PlayStation Move controller appears on screen in the form of a variety of objects and as you move it around to interact with characters and the environment the actions that you make in your living room play out in front of you. The controller becomes the likes of a toothbrush, a hair-clipper, a razer and a fan and it’s up to you to respond to what’s going on in the game and mimic the movements of those objects to shave heads, squat bugs, fan birds into baskets and a variety of other crazy objectives.

There are three game modes in total. Survival is the solo game that tasks you with completing a set of objectives against the clock. Whenever you make a mistake the metre running down the side of the screen diminishes and if it reaches the bottom it’s game over. The idea is to last for the longest amount of time and get your name to the top of the leader-board. There are nine mini-games in total and Survival throws them at you randomly, whereas FreePlay mode allows you to jump into any of the mini-games without the added pressure. Completing the trio of modes is multiplayer which caters for up to four people. It's a nice touch that you don't have to go out and purchase more Move controllers. Instead, you can all use the same controller and pass it around taking turns on the mini-games and there's a few twists along the way such as joker rounds to keep those waiting for a turn involved. 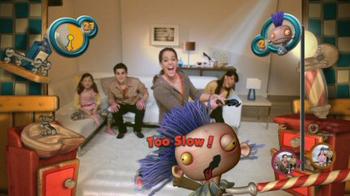