The sequel to the free-roaming action adventure

By bombarding you with XP and new powers like an eager congregation showering a bride with confetti, inFamous 2 rewards you better and more frequently than most games. With over 50 powers to unlock— and dozens of side objectives to encourage you to experiment with Cole McGrath’s parkour skills and superhero/anti-hero weapon set—the campaign is also very well-paced, never leaving it too long before throwing a new challenge at you, or giving you further reason to experiment and explore the gorgeous city of New Malais. In almost every way, this electrically-charged, open-world action adventure is better than its predecessor.

For those unfamiliar with the franchise, the first game in the series saw bike messenger Cole MacGrath transform into an electric superhuman after Empire City suffered a devastating attack caused by an explosive device hidden in the package he was delivering. To cut a long story short, and avoid spoilers, MacGrath ended up on the chase of an evil, glowing entity called The Beast, choosing a “Good” or “Evil” Karma path and using his new-found powers to restore order and build up his strength for the final fight against the monstrous creature.

inFamous 2 unsurprisingly picks up where its prequel ends. This time, however, The Beast is clearly in sight – 1,500 miles away to be precise. The bad news, however, is that the slate is wiped clean in terms of Cole’s powers. Once again you need to earn XP, collect Blast Shards and build up Cole once more into the ultimate hero or villain with an expansive range of powers to make him strong enough to take down The Beast in the final showdown. Though the ending is predictable and the characters and references to the first game will be difficult for newcomers to understand, it’s a typical over-the-top, comic book-style narrative that should appease fans of the original. inFamous fanboys may also be pleased to know that you can reap rewards if you played the first game by starting on the “Good” of “Bad” karma path from where you left off, gaining special perks for the trophies you unlocked in inFamous. 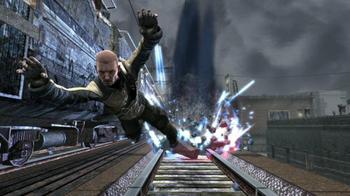 Once again, inFamous 2 features the same “Good” or “Evil” choices from the original. Two new characters, Kuo and Nix, represent these two paths and also symbolize your good and bad conscience. While Kuo represents good, Nix represents evil, with both NPCs appearing in cut-scenes to encourage you to do the right or wrong thing. They also appear in-game to help you in combat to defeat enemies more efficiently. Though Nix's over-the-top voice-acting really grates after a while as she shouts out "Blast them, man!" for the dozenth time, the two characters are a decent new addition to the series and represent some enjoyable moments— such as when Nix helps you to tip oil barrels from the rooftops onto banners dotted around the city square and then you get to set them alight and send enemies screaming and dashing for safety.