If anyone knows how to create a weapon set to inspire and excite gamers, it’s Insomniac Games. With the brilliant Ratchet & Clank series and two Resistance games already behind it, the California-based developer has had plenty of practice at getting it right, and has proven that it has the creativity to think outside of convention to create some unique weapons. As a PlayStation 3 exclusive, Resistance 3 harnesses the power of Sony’s console to deliver a movie-quality production, but once again it’s the vast array of powerful weapons and upgrades that turn out to be the main stars of the show. What's just as impressive, however, is that the series has improved in a multitude of ways, and in this third iteration Insomniac has finally delivered a first-person shooter that consistently delivers in every area throughout its gripping campaign.

With series’ protagonist Nathan Hale out of the equation, Resistance 3 feels totally revitalized. After killing Hale at the end of Resistance 2, scar-faced Joseph Capelli steps forward as the lead character and initially he seems like an unlikely hero. Having been dishonorably discharged from the army, the story begins by showing Capelli’s tender side. With only 10 percent of the population still alive on Earth since the devastating Chimera invasion, he’s now settled down with his wife and child, and has at least tried to build a normal family life around an abnormal situation. It’s a clever move by Insomniac to portray Capelli as a family man and use his wife and child to tug at your heart strings throughout the campaign, which provides a stark contrast to the courageous, fearless man he portrays while engaged in combat. 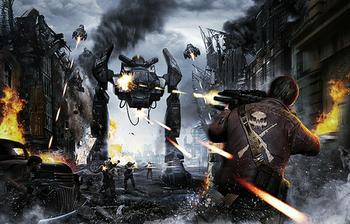 In the first instance, you feel that reluctance from Capelli to go head-to-head against Chimeran forces once more, but knowing that his primary reason is to save his family, you immediately feel a connection with him – something that we never felt with Nathan Hale in Resistance 2. Indeed, the storyline in Resistance 3 is well paced, easy to follow and hooks you right from the out-set and throughout the 20 chapter single-player campaign; a far cry from the convoluted story of Resistance 2. The narrative is played out via some polished cut-scenes, although journals that you find hidden away in your trek across 1950’s America also help to build on what is ultimately the best story in the series by a long shot. Great script writing and a likeable main character keeps you eager to find out more, and a twist about three-quarters of the way through the game will have you reeling.