Originally released for the Sega Dreamcast in 2000, but now in HD

Trapped in the void between survival horror and the now more familiar action horror that gamers are used to; this Resident Evil Code: Veronica X HD re-release is - depending on how you see it - either an auspicious attempt by Capcom to reanimate an often forgotten chapter in the series or a reminder of just how lucky we are to have Resident Evil 4.

When the game was originally released for the Dreamcast 11 years ago, it marked a defining moment in the history of the Resident Evil series as the first to include full 3D backgrounds in place of the old-school pre-rendered fare. Before you get excited though, those of you who have played the original (or indeed the PS2 remake that this downloadable version is based on) will know that the 3D backgrounds were just a small step when it was really time for the series to take a giant leap.

As such, Code: Veronica X is a throwback to the days of true survival horror, when the biggest technical challenge in the game was navigating in enclosed spaces, and the Redfield siblings (and Steve too) seemed to have a pathological inability to aim anywhere other than the floor, straight ahead or uselessly high. 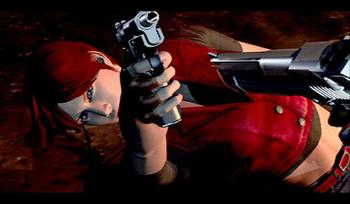 The camera angles add another layer of bewildering difficulty (and in some cases blind panic), in that their sudden, jerky transition can easily obscure an enemy, making even the slowest shambling neck-biter a potential threat - despite the auto-aim’s tendency to target enemies off-screen allowing you to literally try to take down the zombies with a shot in the dark. The age of the game shows, too. The HD label attached to the title never really seeming to factor in despite the minor improvements in the pre-rendered cutscenes, lighting and shadows.

In short, as much as the original Code Veronica relied on depriving the player of their senses and instilling a sense of powerlessness through how they interacted with their character and the constraints of the technology, this modern HD ‘remake’ relies on the fact that we’re all so used to the luxuries of the successors in the series to deliver an authentic survival horror experience.