Tomb Raiding as it's meant to be

What made Tomb Raider such a huge success was the total originality of the game. It was one of the first to have a heroine in the lead role and, rather than just be a bog standard platformer with a few shooty bits, Tomb Raider was chocked full of puzzles that were fairly easy to grasp but tricky to complete. Often, these puzzles were just part of one overall puzzle, which made it all the more fun. You could see that you needed to open the door and you could see that lowering the ramp would let you get access to an unreachable area but you had to figure out how to get to the ledge where the cog for the ramp was… and so on.

< But a perhaps bigger part of this was Lara’s battle against the environment itself and here is where her now legendary flexibility came in. She could leap up and grab ledges, flip over chasms and swan dive into pools… and a huge part of the fun of playing Tomb Raider was just figuring out how to get around without killing yourself whilst still managing to get the job done. 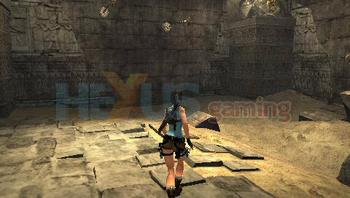 But enough about what made the originals so good, how about this new version? Well, I’m chuffed to say that, aside from a couple of niggles, Lara Croft Tomb Raider: Anniversary brings all of that Tomb Raider goodness back and adds some tasteful extras. Lara is more nimble than before whilst not appearing superhuman in her acrobatics, the puzzles are as deceivingly complex yet logical as before and the environments are suitable vast and impressive and littered with plenty of dangerous beasties for Lara to put on the endangered species list.

Now for those of you that’ve played Lara Croft Tomb Raider: Anniversary on the PC or PS2, you’ll know what to expect as this is pretty much the same game. There have been some changes though, most noticeably in the environments which, although following the same locations as the other versions, are slightly different in places. The only reason I can see is that the control set, whilst being very similar on the PSP, has been chopped down a little, meaning the physical challenges of the environments had to change a bit too. 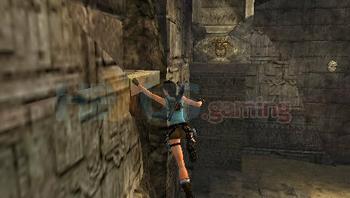 However, don’t take change as being a bad thing because, if you’ve not played Lara Croft Tomb Raider: Anniversary before, this PSP version brings you as close as you’re going to get to original old skool Tomb Raider fun. It looks as though developers Crystal Dynamics, rather than just giving us a cut-down PS2 port, have gone back and pretty much rewritten Lara Croft Tomb Raider: Anniversary specifically for the PSP, just using the level design and story from the other versions.

You’re still on the trail of the Scion of Atlantis and that annoying business tycoon, Jacqueline Natlas is doing her best to stop you getting it and the rest of the story is pretty much identical to the PC and PS2 versions. You’ll be visiting a variety of locations, each with their own unique look and feel, ranging all across the globe… It makes me wonder how all these cities stay lost if Lara’s out there finding them all the time. 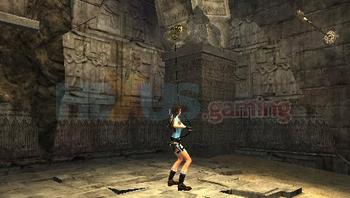 Anyways, those of us that played the original Tomb Raider all those years ago will get plenty of nostalgic feelings, right from the start as Lara Croft Tomb Raider: Anniversary goes back to its roots and does it all over again… but better. The environments are even more complex and possibly more massive than before and the puzzle solving, whilst still not exactly mind-bending, is still a perfectly balanced blend of logic and dexterity. 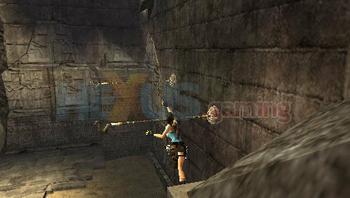