Can I hear you say YAAAARGH!

“Drink up me hearties, yo ho!” – Nick Haywood appears to be more than a tad seasick… Right then, Pirates of the Caribbean. You either love it or hate it. Me? I love it. It’s a cracking film full of humour and action, Johnny Depp plays a great lead role and besides the swashbuckling swordfights, it’s got some pretty good special effects, a liberal smattering of English actors playing English parts (a Hollywood first, surely?) and it has the delectable Kiera Knightley as a bit of eye-candy for the fellas. However, it does have a plot that requires a good suspension of belief or you’ll soon see plot holes big enough to sail a ship through… and I’m sure there’s plenty of you who just hate it. 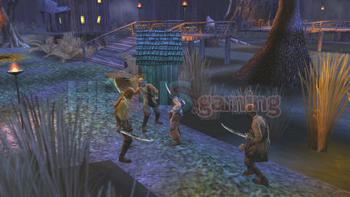 Fair enough, hate it if you will. I know it’s far from perfect and the sequel, from what I’ve heard, is very much more of the same. And speaking of sequels, that brings us nicely to the subject matter, Pirates of the Caribbean: Dead Man’s Chest on the PSP. Despite not having seen the film, I’ve seen the trailers and read the plot on various sites, so I know what to expect and I have to say that the game appears to follow the film storyline in a rough way, with you playing the part of Jack Sparrow, sorry, Captain Jack Sparrow, as he battles to reclaim his soul from Davey Jones. So buckle your swashes, splice the mainbrace and all other manner of nautical clichés as we head off into unknown waters… 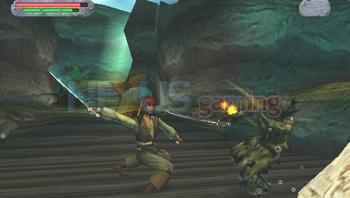