Break dancing on your PSP?

Ah yes, Hip-Hop. I remember when Hip-Hop first broke into the UK. I was busy buggering about on my BMX, trying to pull off a 360 reverse on my mate’s halfpipe while in the background we had the latest in New York Hip-Hop playing on his tape recorder. Then there was that film, Breakdance: The Movie, which was a blatant cash-in on the Hip-Hop scene but focused on the dancing that came with it. It’s a testament to the whole scene that breakdancing is still going strong today and is even more refined than before, with massive competitions and teams throwing down some awesome set piece moves… never mind the individuals who appear to be able to flex their limbs in directions nature never intended them to go… As a spectator sport, it’s amazing. 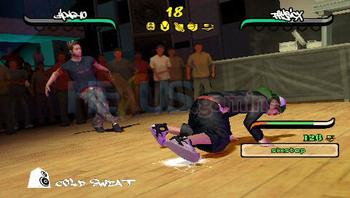 But as amazing as it is to watch, it’s even harder to do. I’m far too old to be caught even attempting to spin around on my back, windmill and then hold it all in a one handed baby freeze… I couldn’t do it at 14 and I sure as hell can’t do it now. So this is where B-Boy from Sony and FreeStyle Games comes in. You play the part of a break dancer starting out from scratch and then battling his (or her) way up the ranks to be crowned King of all spinny-on-your-back-on-a-sheet-of-cardboard Land… or something. 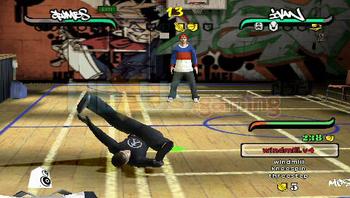 Now I’m sure you’re all familiar with the idea of breakdance battles but just in case Mr Dutton is reading this and wondering what the hell I’m going on about, I’ll give you a quick break down, (excuse the pun). The idea is that two dancers face off against each other throwing down more and more extreme moves in an effort to out-do their opponent… the loser is the one who the crowd feels was the worse dancer who, presumably, goes off to wait outside and put a cap in the winner’s ass… or not. And this is exactly where B-Boy places you, in a variety of battles in which you throw down your moves and out-dance your opponent. Simple, eh? 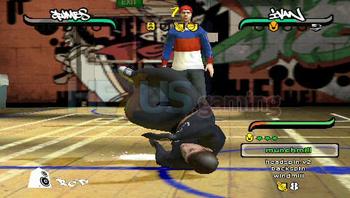 Well, no. Not quite. You see, besides the basic four moves which you activate with the symbol buttons, you also have to worry about keeping the beat, using the shoulder buttons and your positioning on the mat, using the arrows buttons. But having an extra ten thumbs is the least of your worries as B-Boy, sadly, has a fatal flaw…