Desperado, why don't you come to your senses?

Nick Haywood ‘looks a bit Mexican’ and was last seen trying to wade into America...

I was going to try and write this review in a Mexican accent, but having read three paragraphs weeth more ‘e’s than a mid-90’s rave, I decided against it. Still, I can sell you a ticket in la Lotteera, every one ees a weenah!

But why this Mexican influence? Well it has to be because Chili Con Carnage, the third person shooter from Eidos is out on the PSP and, to be totally honest, it’s such a bloody good game that I’m seriously considering growing a pencil line moustache and wearing a sombrero.

To get an idea of what Chili Con Carnage is about, think along the lines of GTA... but then throw in more humour than a night at the Comedy Store, a range of moves that makes Jackie Chan look dull and more guns than the average IRA cache... Oh, and a range of bad guys and bosses so off the wall that you’d think Mexico has adopted our Care In the Community program... 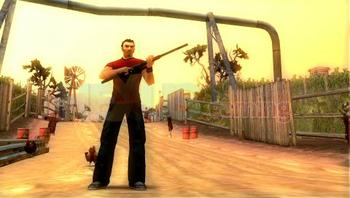 Chili Con Carnage kicks off with a nice leetle(sorry) cut scene where your character, Ram, is stopping off at the local Police headquarters to give his dad a birthday present. He arrives just in time to see the most unlikely of assassinations as a bloody great combine harvester crashes into his dad’s office making something of a mess and giving everyone a good reason to lay off the cornflakes for a week or two.

This being Mexico, there’s no way Ram can let his father’s death go un-avenged and so starts a gun spree that takes Ram across Mexico from farming villages and back roads through to the cities compounds of big drug lords and crime bosses as he tracks down and deals with those responsible for his dad’s wheaty death. 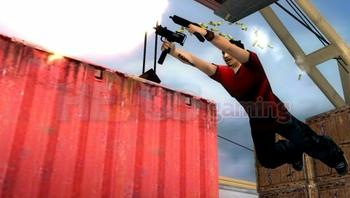