Now I’m sure there’s going to be loads of Alone in the Dark aficionados banging on about the series as a whole and what a ground breaking game the original was and all that. Yes, it was damn fine stuff and the original trilogy, even that Jack-in-the-box mini-game that game out, were hauntingly fun to play. Some would even say that the original Alone in the Dark was the first survival horror game and inspired the likes to Resident Evil, Silent Hill and so on.

I personally reckon that it came out in part as response to Delphine, (remember them?), who were riding high with the sprite based characters laid over wonderfully detailed backdrops. Alone in the Dark upped the ante with 3D polygonal figures over details backdrops but boy was it a hit. Chuck into that the superb atmosphere, the fact each game was a part of a trilogy and obviously intended to be so and Alone in the Dark really was the daddy of the scary adventure games genre, later to be known as survival horror.

Anyway, that’s the past and bringing us up to nearly the present, I had the pleasure of seeing Alone in the Dark first at E3 2006 and then again at Leipzig… and it looked pretty damn good running on the Xbox 360 and with the main character Carnby being reincarnated to fight off an ancient evil that manifests itself in New York’s Central Park.

In fact, why am I bothering to tell you all of this? Just watch the trailer below and you’ll get the idea.

So, from that it looks like Alone in the Dark is staying true to its scary roots and giving you plenty of adventuring action as you work your way across Central Park and into the heart of the disturbance. And to be fair to Alone in the Dark, that’s exactly what it does. This is gameplay based storytelling at its very best with a twisted, convoluted story-line that leads you deeper into a macabre, Lovecraft-style world with you as the key to ending the rise of evil... and I’ll stop there before I give any of the superb story away. 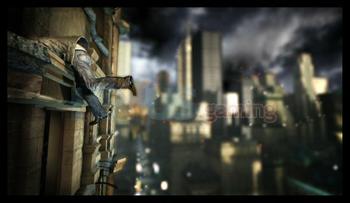 You could argue that the story is a little predictable, but then aren’t most stories concerning a hero battling against evil? You know he’s going to win, but you keep watching, reading or in this case, playing, right up to the end anyway. And it’s the style in which the story is told that is possibly Alone in the Darks biggest plus point. It really is very good. Not just from a pacing and set-piece view point, but from the way that the developers, Eden, have made full but unobtrusive use of cinematic effects. So there’s loads of depth of field blurring, low camera angles, action angles, slow-motion and crash zooming… all beautifully tied into the gameplay so that it flows near-uninterrupted letting you enjoy it and at the same time just play the game. 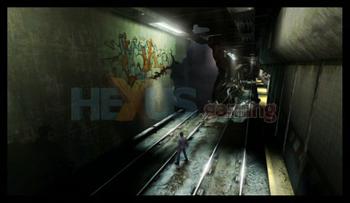 But there’s also one rather large flaw which, unless you persevere and work past, will turn most people off in the first fifteen minutes…