What secrets lurk in Katurga-12

The storyline is certainly clichéd and over-the-top, but with the fascinating theme of Time Travel running through its very core, it's still a very appealing concept. At the start of the game you discover that the Russian government in its search for Uranium during The Cold War of the 1950’s stumbled across a rare and powerful element, named E-99. Secretly, it set up an installation the size of small city to test the element and run experiments in an attempt to harness its power to use as a weapon for world domination.

Things didn’t go quite according to plan and the Russians, for reasons unknown, had to abandon the facility. Before it left, it buried the city so it couldn't be found, but in 2010 the American government discover radiation levels are extremely high over the hidden area and you’re sent to investigate what's going on.

The unpredictability of the storyline, which leaves you intrigued as to what you're going to discover around each corner, is a big part of its attraction. Indeed, Singularity is a well-written and produced piece of work that manages to grab your attention from the outset and, most importantly sustain it. 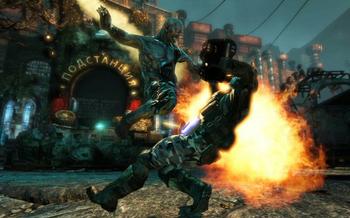