More than a big franchise cash-in

Whatever campaign you decide on, you're going to be using a range of weaponry, special powers and various Transformer forms to kill dozens of bots before engaging in some tough big boss battles as you follow the leaders Megatron or Optimus Prime across Cybertron in a war over an all-powerful dark energon (power source).

War For Cybertron isn't your standard, run-of-the-mill, big franchise quick cash-in - that amount is clear from the outset. There’s some superb voice acting throughout the game, and despite some repetitive environments it has the feeling and look of a well produced and highly polished game with an appealing weapon-set, great range of Transformers to command and some fast and furious battles. Throw in the fact that there's an excellent and robust three player co-op mode, plus some impressive cut-scenes and set-pieces to look forward to and you've got a game that Transformers fans should be utterly delighted with.

There are four classes at your disposal covering ground-based and aerial combat that spans the comprehensive list of playable characters plucked from the Transformer's Universe. You do feel slightly cheated that you have to choose just three characters at the start of each chapter rather than being able to switch as you please between them all, but there’s still enough variety to make things very interesting and you’ll soon find your personal favourites and learn to play to their various strengths.

The enemies that you face are far less interesting though, generally fitting into the same couple of categories. Coupled with some re-hashed environments, it means that the action can get quite repetitive - to the point where you feel like your enemies are trying to outwit you purely by sheer numbers rather than skill. In the single player campaign, there were moments when I was particularly overwhelmed by bots but underwhelmed by the challenging and frantic action. War For Cybertron is a much more enjoyable experience when you play co-operatively and indeed it feels like the game was structured specifically with co-op play in mind. When you do hook up with a friend then, there's much more scope to apply tactics and you really get the most out of what is an engaging single player campaign. 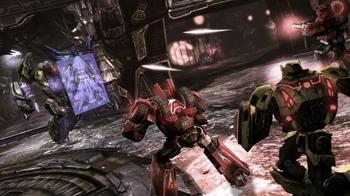