A shaman leading a tribe On a sister planet, in an extreme version of earth

When From Dust was first announced, it sounded like an interesting concept, but by the time we got round to playing it, we were skeptical. Although it had received decent reviews, it seemed like it was jumping on the indie sandbox bandwagon that Minecraft had created, but coming from a big publisher, would probably miss the whole point entirely. Because the thing about Minecraft is you create your own fun, and this kind of concept, and the concept of pure, unadulterated FUN, is not something that big game developers have managed to grasp in recent times. (If they did, then Quicktime events wouldn’t exist.)

However, after only playing for 5 minutes, it became apparent that From Dust was nothing like Minecraft. From Dust is more of a God game than a Sandbox game. In From Dust, you have the ability to manipulate the world around you. You can pick up blobs of Earth, Water and Lava, as well as move certain plants for strategical advantage. The controls for this are simple, and easy to get your head around. Each mission involves colonising all the totems in the world which is wrought with natural disasters and perilous surroundings for you and your little band of villagers to navigate around. 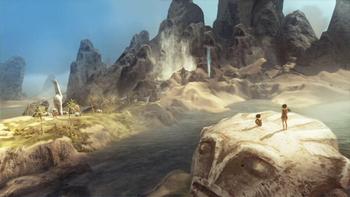 Each totem grants you special abilities that last for a limited amount of time before being regenerated, such as the ability to jellify water, carving pathways through it, or the ability to put out all fires on the map. After you have reached all the totems, a portal opens up for you to enter the next world, which is full of yet more dangers. Unfortunately, the AI is just plain stupid, ignoring the obvious paths you lay out for them in favour of running through a forest fire to get to their destination. This causes a major problem for From Dust as, unlike most Strategy games, you can’t choose a selection of units and send them to an objective. Instead, you simply select the objective and cross your fingers that the little guys behind the lava don’t decide to join their friends on the other side.