Taking to the sun-drenched streets of San Fran

Review written by Omar Khan
The fourth instalment of Ubisoft’s ‘Driver’ series goes back to its roots in Driver: San Francisco; and with its fast paced, hard-hitting action, ultimately provides the best experience so far…

Most driving games don’t really have that much depth when it comes to story, but that’s where Driver: San Francisco differs from others in the genre. The story continues where Driv3r left off, with you, John Tanner and your nemesis Charles Jericho continuing your feud. The game starts with Jericho managing to escape custody and causing a crash that lands Tanner in a coma. This is where the key new feature of Driver: San Francisco comes into play.

With Tanner in a coma he can't just pick and choose the vehicles he wants to drive, so instead he ‘Shifts’ from car-to-car and - in a dream-like manner - hovers above the beautiful city of San Francisco. This gives you a bird's eye view of the city, similar to Google Earth, which allows the player to travel across the map much faster. However, you soon realise that ‘Shift’ is not simply just a tool for getting from A to B. 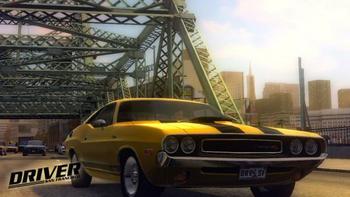 The more you play around and experiment with ‘Shift’, the more you realise its potential. Not only does 'Shift' provide a way to get in and out of cars, or travel across the map, but it allows you to rectify driving mistakes, and provides tactical ways to take down enemies in both on and offline play. The further along the story you progress, the more you are able to zoom out on the map, making it easier to traverse large sections at a time.

You also have the ability to boost by pushing up on the left analogue stick, and ram other cars with L1/LB. Both these actions use up an energy bar on the screen that replenishes over time, and can be increased via upgrading.