The demand for Kinect games that appeal to the core Xbox 360 audience - who are far more comfortable with a machine gun in hand than they are throwing a virtual Frisbee to a cartoon dog - hasn’t gone unnoticed by the SEGA camp. In fact, the Japanese developer has torn up the family-friendly Kinect book entirely and stepped bravely into the knee-trembling world of survival horror in its latest title, Rise Of Nightmares.

Slaying zombies and hideous-looking creatures using motion-sensing controls isn’t a new idea. The likes of ‘Dead Rising: Chop Till You Drop’ and Sega’s own ‘House of the Dead Overkill’ has already proven that there’s an active audience prepared to stand up and wave their arms around to decapitate, impale and beat enemies into submission.

In terms of the control scheme, however, SEGA has thought outside of the conventional box. Instead of opting for the easy route of creating an on-rails zombie-slasher that simply requires you to point and shoot while being driven around on virtual wheels, Rise Of Nightmares asks a lot of you in terms of physical interactivity. It’s a brave move by SEGA to implement such an ambitious control scheme to a game that is fairly straightforward in concept, but ultimately, it’s a decision that makes gameplay just as frustrating as it is entertaining. 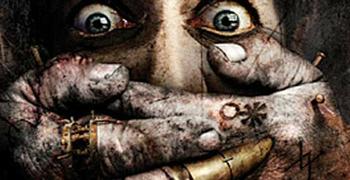 The action kicks off with Josh and his wife Kate travelling by train across Eastern Europe. Josh is an excessive drinker and when Kate finds a hip flask in his jacket pocket, she isn’t happy. However, before they have a chance to sort things out the train derails and Kate is abducted by a mad scientist named Viktor. Josh is left to search the wilderness, which is full of nasty monsters keen to tear him to pieces, as he follows the trail of his beloved. The voice acting is cheesy and the plot is thread-bare, but the dark atmosphere and creepy setting of the monster-filled mansion proves to be one of the highlights.