As the moon sets and the sun rises through my drawn curtains, I take a satisfying swig from my mug of black coffee and glance at the clock. It's 7am but I haven't just woken up; I've not actually been to sleep yet. In fact, I've been playing Skyrim for the last 10 hours, spending countless minutes trawling the wilderness harvesting plants so I can brew potions, while looking out for babbling brooks and streams where I know the precious Nirnroot grows.

Like everything undertaken in Skyrim - no matter how much good-intentioned focus is set on a mission or objective - it's never too long before distraction seeps in, usually catalysed by something completely unrelated. While gathering plants, occasionally stopppng to slaughter a wolf for its precious fur, I spot two towering giants in the corner of my eye. Making the presumption they'll yield some fantastic loot if I chop them down, I decide to head over to investigate. As it happens, these giant creatures don't take too kindly to a midget waving an axe at them. One raises a club high into the air and crushes the ground with such force that it sends me catapulting into the air like a dwarf from a canon.

Unperturbed - and after being sent way back to my last save point - I decide to return to take on the giants from afar, perhaps with my enchanted bow or a strong blast from a shock spell. But on the journey something else catches my eye. Far away in the distance a camp-fire burns brightly in the darkness, beckoning me to explore it. I decide to save the battle against the giants for a later date - they will pay for such impetuosity - and head off to investigate the scene where I discover a heavily-guarded bandit's camp. 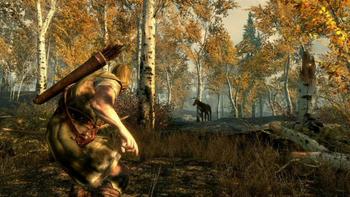 What's that coming over the hill?

After slicing through the enemies with my banded steel sword, I discover a door lodged into the hillside. It leads deep underground through a maze of corridors into secret rooms guarded by sword-wielding skeletons that rise from their coffins. By the time I've made my way out of the dimly-lit cavern, I've discovered marvellous treasures, slaughtered dozens of undead, dodged deathly traps and solved mystical puzzles. This unplanned diversion has taken an hour to complete, yet it seems like minutes.

Standing outside the cave, I now check my map to see if there's another quest nearby. I use my clairvoyant skill to follow the path to my new mission, heading into the depths of the woods toward the snow-capped mountains of the North. This relaxing moonlit walk, where catching a few torchbugs is becoming quite a pleasant diversion from the frenetic battles of the bandit's camp, is crudely interrupted by two cackling witches. A furious battle ensues, which results in the heavily-wooded, dark area lighting up like bonfire night, with colourful trails of magic whizzing in all directions from the tips of the witches' wands.

I barely manage to survive the ordeal, but eventually wear down the witches with a fiery blast from my left hand and a few well-timed slashes from my poisoned sword in my right. As the ghost of one witch walks off nonchalantly in the distance (did I actually kill her, or not, I'm asking myself) I head up the steep incline into the frozen hills toward my objective until I hear a dull roar echo across the mountains. A huge silhouette of a dragon fills the skies, and I run for cover behind a nearby rock, greedily watching its every movement. After a momentous battle, teasing the dragon to the ground with my bow and arrow before unleashing fury with my 'superior' axe, he lies dead at my feet. I absorb his power and let out a shout - "I am Dragonborn!"

It's hard to imagine that anyone's experience of Bethesda's RPG will be the same as mine, yet Skyrim binds players together with its love of adventure. Everyone I know that plays Skyrim wants to tell me about their journey, let me know what they've seen and done; and I, too, am keen to speak of my adventure. That's the magic of Skyrim right there. Even when you're not playing it, it stays with you like a loved one that you yearn to spend time with and who you talk about fondly to anyone who will listen. And when you reunite and set off on a new quest you still get that twinge of excitement, like the first time you met.

Anyone who played the last game in Bethesda's epic role-playing game series will know what it's like to head off on a major mission and get totally distracted by something else. Skyrim is no different, and it's all the better for it. It's a place where minutes turn into hours and night turns into day as one is inexorably drawn and totally absorbed in its magical world, and even obsessed at doing things that others might consider mundane, like my fixation on finding Nirnroot. From the moment opportunity arises to choose your race and shape your destiny, Skyrim consumes. And, once deep inside its fiery belly, there's no better feeling. Without a shadow of doubt: this, my fellow adventurers, is the greatest RPG of our time.