You are here:
Windows Phone Features

It takes two to tango

I've just finished watching the webcast of Nokia CEO Stephen Elop and Microsoft CEO Steve Ballmer discussing their new partnership over Windows Phone 7. I'll give you my account of the event, then my analysis.

Elop kicked things off by saying the game has changed, but that he's an optimist. He said this strategic alliance will "disrupt the current trajectory" of the mobile market, and that they will produce technologies "beyond anything that currently exists." But he limited his definition of Nokia's involvement with WP7 as: "...help drive the future of the platform."

Ballmer talked up how much people who have used WP7 like it, but once more conspicuously avoided detailing sales numbers - I suspect they're low. He was keen to talk about how much Microsoft and Nokia guys have already worked with each other, and seemed to imply there is already a handset ready to launch. This makes me reasonably confident the Nokia event in Barcelona this Sunday will be a WP7 handset launch. Is there already an N7?

Onto the Q&A, Symbian was confirmed as being maintained for low-end phones. Later on there was a spontaneous laugh from the audience when a journo announced himself as being from All About Symbian. On Ovi, Elop said Microsoft and Nokia now have a "joint dependency on a shared collection of services," whatever that means.

Then, as far as I'm concerned, the key question was posed regarding the exclusivity of the deal. "It's not exclusive," said Ballmer. "But there are things we're doing with Nokia that are unique." Elop even said he welcomed other OEMs as contributors to the ecosystem. "Our number one priority is the success of the ecosystems, we have plans to differentiate within it," he said.

Yeah, right. Elop even directly contradicted himself when asked why he didn't go for Android, by saying it would have been too hard for Nokia to differentiate itself, that its phones would have become commoditised and that most of the value moves to Google. I think he's right on that point, but the differentiation on WP7 question remains unanswered.

On the matter of MeeGo, Elop basically said MeeGo was not developing quickly enough to provide Nokia with the competitive mobile ecosystem it so desperately needs. It seems to have been consigned to the status of development platform, following the precedent set by development partner Intel when it gave up on its discrete graphics project.

Elop did say Nokia would be shipping its first MeeGo device sometime this year, but only in order to ‘learn from it'. The MeeGo team will then move onto looking at ‘future' devices, which may or may not include tablets. Elop confirmed that this deal "will substantially reduce our R&D spend." This has to go down as yet another failure by Intel in the mobile space. 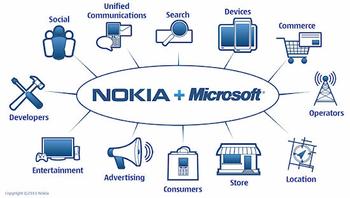