Research In Motion (RIM) shares have surged up to 20 per cent in afterhours trading following its Q2 earnings report publication. Despite figures in the report showing disappointing revenue, figures “still well below where they need to be”, the results were better than expected. Additionally RIM reported that cash reserves had been bolstered by “collecting on cash owed to the company, drawing down inventories and cutting costs” according to a Reuters report today.

The Canadian company reported a net loss of $235 million, a year ago RIM made a profit of $329 million during the same quarter. Company revenue rose to $2.9 billion, just two per cent more than Q1 but compared to a year ago that’s nearly 30 per cent less. BGC Partners analyst Colin Gillis said to Reuters “You still have revenue declining 31 percent on a year-over-year basis but it's certainly not the train wreck that a lot of people feared.” Most importantly, he added “They live to fight another day.” 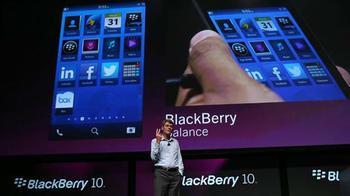 Two fingers to the doubters

Despite losses RIM has increased its cash reserves. The company collected cash owed them by third parties, cut inventories and slashed costs in order to produce this accounting wonder. Analysts warned this activity was not sustainable in the long term, a profitable competitive business is essential for RIM to thrive again.

RIM CEO Thorsten Heins told investors that BlackBerry 10 will be a success and take market share away from its rivals. Additionally he suggested the new BB10 devices will attract people who have never used a smartphone before. 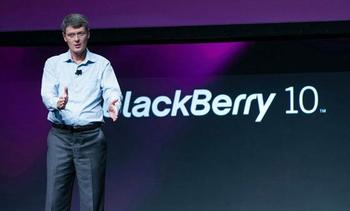 The iPhone 5 is about this long!

We saw a glimpse of the impressive new BB10 OS earlier this week at the BlackBerry Jam event. Initially the new platform will launch with mid and high end devices but lower end, mass market devices are intended to be launched later in the year. “We're working on a concept for the entry level. You might see a product in the entry level by next year,” said CEO Heins. Until then current BB7 devices will form the entry level, low-end BlackBerry platform. The CEO has also been meeting with companies wishing to license BlackBerry technology though he revealed nothing about any development in these arrangements.

Do you think BlackBerry has a shot or is it in terminal decline enjoying a dead-cat-bounce today?

1. Drop Black Berry OS
This include the new OS. it has no real established market and it wont hit the critical mass it needs to sustain itself as a platform for developers.

2. Turn all of the cool Blackberry features such as centralised device management and device encryption and push email into a middle ware for other devices.
Charge for it and add on enterprise charging structures and large enterprises will fall over themselves to move to it. With BYOD happening in alot of companies making user device centrally manageable by installing and connecting a simple app would be very useful for alot of corps.

3. Create Black Berry android devices with the middle ware baked into the core
These phones would also be able to run android and blackberry apps on the same hardware make the hardware high quality with tight integration to existing blackberry infrastructure that alot of corps have. the same device would be attractive to consumers because of the existing android as well as things such as blackberry messenger and for corps the integration with existing blackberry infrastructure (that is already paid for) would make migration easy.
Posted by Smudger - Fri 28 Sep 2012 15:18
I like the Auto on/off feature on BBs, I don't know why no-one else does this.
Posted by alsenior - Fri 28 Sep 2012 15:29
accidental dual post
Posted by NiPPonD3nZ0 - Fri 28 Sep 2012 18:05
I actually have a old BB Curve 8520 as my main phone. I had a shot with Android with a Samsung Galaxy Duo and a Sony Ericson x8…

I don't get were all the fuss is about. its a buggy software, unreliable… Both of them phone i've used crashed more in 6 months of use then my Blackberry over its 2 years…

A friend of myne (the one how convince me using the Samsung…) has a Samsung Galaxy Xcover and the damn phone is allways rebooting for no reason, it went on to RMA and its the same, and they say that the phone has no problem…

For me thats just unaceptable.
Posted by Smudger - Fri 28 Sep 2012 18:24
Could be you had 2 of the worst Android phones ever there…
You say Android sucked but both of those manufacturers put their own skins on their phones, which were, well, rubbish. Later Samsungs and HTCs or pure Android (Nexus etc) seem to be much more stable. And they're not depending on a single network switch in Slough in order to work properly…