Plantronics has been producing high-quality headsets for about as long as we can remember, but the name of the latest - Legend - suggests that this is the best yet.

Described simply as 'the world's smartest headset,' this £60 solution is geared toward professional users who demand comfort and top-notch call quality above all else. And that's an important differentiation to make. There are plenty of smaller Bluetooth headsets on the market, and in comparison, Plantronics' Legend looks like a chunky piece of kit.

The use of plastic material ensures that the Legend is suitably light (18g), and the textured, almost rubber-like finish makes the headset feel comfortable around the ear, though it's simply not small enough to go unnoticed. We found it very comfortable to wear during calls, but we preferred to take it off when not in use.

Plantronics is continuing to use the same form factor as the award-winning Voyager Pro, and the Legend is, for the most part, an evolution of the series that touts refinements throughout. The 2012 model is fractionally smaller in body and features a thinner boom, yet it still feels well-built and the black-with-silver design has a professional look about it.

Plantronics has made the transition to a proprietary magnetic connector that, while smart and well-implemented, doesn't offer the same level of flexibility.

A choice of three silicone-gel ear tips are available - small, medium (default) and large - and it's easy to switch between them; simply push the tip in, rotate to the left and it pops right out. Plantronics' bundle also includes a USB charging cable, along with a mains adapter and an in-car adapter, but the USB cable is short, so don't get any ideas of charging while you talk and drive.

There's another potential stumbling block with the USB connector; it no longer uses an industry-standard micro-USB jack. Instead, Plantronics has made the transition to a proprietary magnetic connector that, while smart and well implemented, doesn't offer the same level of flexibility. We've found the magnetic cable very easy to attach - and strong enough to lock into place - but there's always the risk of losing the cable, and we miss the flexibility of being able to pick up any micro-USB cable and plug it in.

The charge port, in our estimation, is a step backwards for Plantronics, which is a shame as the rest of the Legend's buttons are well-implemented. The power button is now a dedicated switch, so you can easily turn it off when not in use and the volume switch near the top of the earpiece is easy to use (though we did mistake it for the power button on one occasion). Meanwhile, Plantronics has moved the Voice button to the back of the boom, as opposed to on the side, and a small mute/pause button can be found on the boom's top edge.

Each button is ideally positioned and the Legend is comfortable to wear, but it's in use that the headset truly proves its worth. In keeping with the older Voyager Pro, the Legend packs an integrated Smart Sensor that detects when the headset's in use. Simply putting it on your ear will automatically answer an incoming call, transfer a call from your phone or resume streaming audio. Similarly, taking the headset off is a nifty way of transferring an active call back to your phone or pausing streaming audio, and the Call button is automatically locked to prevent accidental calls.

The Smart Sensor works really well, and in truth so do practically all of the Legend's features.

The Smart Sensor works really well, and in truth so do practically all of the Legend's features. The multi-point Bluetooth radio allows the headset to be paired with two different devices (handy if you have a work phone and a personal phone), support for the Advanced Audio Distribution Profile makes it possible to stream audio direct to the headset (great for podcasts), and the new Caller Announce and Voice Command features are useful during everyday use.

Caller Announce tells you who's calling using the Phone Book Access Profile (it does a surprisingly good job of reading out names), and Voice Command responds to basic commands such as 'answer,' 'ignore' and 'check battery.' Simple upgrades, but knowing exactly who's calling and being able to answer/ignore without looking at your phone or pressing a button is mighty convenient. Every feature has a purpose, there are no obvious gimmicks, and, well, it all just works.

The result is excellent call quality, with the Legend producing crisp audio while doing a great job of minimising background noise.

The result is excellent call quality, with the Legend producing crisp audio while doing a great job of minimising background noise. We've always appreciated the audio capabilities of the Voyager line, and though it's tough to discern whether or not that addition of a third microphone has raised the bar for noise cancellation, it's clear that the Legend is, at the very least, every bit as good as its predecessors.

Pairing the headset with a smartphone is quick and painless (we tested the device on a BlackBerry with no complications), and the Legend is automatically powered into pairing mode when you first turn it on, for added convenience. Bluetooth range is officially quoted as being 'up to 33ft,' but that figure will be impacted by surroundings. With walls in the way, we found that the headset would drop out of range at around the 20ft mark.

Battery life, meanwhile, is provided by a rechargeable 3.5V lithium polymer battery that's rated for seven hours of talk time or 11 days of standby. We've yet to attempt a continuous rundown, but after a day-and-a-half of casual use the headset suggests it'll keep going for another five hours.

There's no doubt that the Legend is the best in the Voyager line. Excellent call quality, good battery life, a comfortable design and well-thought-out features are all part of the appeal. It isn't the sleekest device on the market, and the proprietary USB connector seems an unnecessary restriction, but anyone in the market for a serious Bluetooth headset should have the Legend on their shortlist. 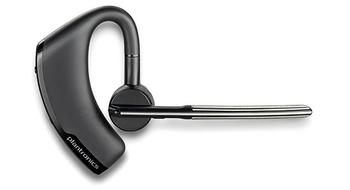 The Plantronics Voyager Legend Bluetooth headset is available to purchase from Misco and Amazon.

Posted by Noli - Wed 02 Jan 2013 22:14
I have a voyager something. It is good but the buttons are too fiddly. These ones look much better however.

And agree, a universal USB micro connector would be much preferred.

Noli
I have a voyager something. It is good but the buttons are too fiddly. These ones look much better however. And agree, a universal USB micro connector would be much preferred.

Relatively happy Voyager Pro HD owner myself, so totally agree that having a dedicated connector - rather than using good old uUSB - was a boneheaded move on Plantronic's part.

Call quality on my VP is pretty good, so presumably the Legend is even better, I also like the multihome feature (although it can be a bit confusing as to which phone is “active” when a call goes off - sometimes the switching isn't seamless) which means I can pair that headset with both works and personal mobile.

Only downsides are that it doesn't seem to work that well with S-Voice on my S3 and - strangely enough - if worn on the left side of my head the connection to phone drops, whereas on the right it's 100% stable.

Suffice to say that if the current headset got broken/lost then I'd certainly consider the Legend as a replacement.

Given the availability of good gear like this I've got to wonder why those numpties you see with their fondleslab stuck to their ear while driving don't do the decent thing and get one… :wallbash: