The lush jungle setting of Jurassic Park's Isla Nublar seems like the perfect location for the budding, thrill-seeking videogame adventurer. While many have tried to re-create the feel of Steven Spielberg's classic 1993 movie, however, no developer - not even Ocean Software with its enjoyable SNES effort - has fully realised the potential of the much-loved franchise, which in the right hands, could make a serious impact among doe-eyed fans of the dinosaur-fuelled romp.

Telltale Games, renowned for its work on graphic adventure games such as the recent Back To The Future series, plans to buck that trend with Jurassic Park: The Game 1 HD, which is available across multiple platforms, including PC, Mac, PS3, Xbox 360 and iPad 2 - the first-generation iPad simply isn't potent enough for the graphics. Keeping in line with its exciting business model, the US developer has opted to release Jurassic Park in episodic chunks, and this current offering on iPad 2 is the first of a four-part series. Priced at £4.99, this means that the full complement of episodes will set you back approximately £20*. 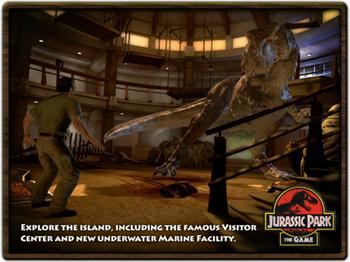 Over the years, Jurassic Park has been presented in many different forms across a variety of genres, from isometric adventures to side-scrolling shooters, but Telltale has opted to create an interactive story that features light puzzling solving, dialogue-driven dilemmas and 'tap-on-the-screen-as-quick-as-you-can' Quick-Time-Events (QTEs). As it turns out, it heavily relies on the latter of those three age-old game mechanics to deliver thrills, attempting to keep players immersed by taking advantage of the iPad 2's touchscreen to draw them into the action.

Occasionally, these QTEs work very well. The interface is intuitive and clear, simply requiring players to swipe their fingers in a certain direction, rub them rapidly left and right, or tap on the screen at the appropriate moment - perhaps to grab onto a rock and avoid inevitable death, or duck under a wayward branch. When the audio ramps up in volume and pace, and the player runs hell for leather from a rampaging dinosaur, these on-rail action sequences can be very exciting and capture some of the drama and tension that fans will remember well from the film.

The problem is the game churns these QTEs out at an alarming rate, which soon makes them feel like a series of obstacles to overcome, rather than a meaningful set of interactions. Stuttering frame-rates don't help matters and players will struggle to pick up a Gold Medal (obtained by completing perfect QTE runs) during some hardware-intensive sections due to gameplay jerking at an inappropriate moment. Despite playing the recently patched version and following instructions to close down all apps and reset the iPad 2 before playing, sadly these QTE sections do still suffer with performance issues.

Jurassic Park is full of these cinematic sequences, and though they look great and can be exciting if the player pulls off a smooth Gold Medal-winning run, Telltale has gone totally over-the-top with how frequently they kick in. What's more frustrating, however, is that players - even those with lightning-quick reactions - aren't given enough time to hit some of the prompts, which often appear on-screen for only a split-second. Death results in a replay of the same QTE sequence, and it's only on these occasions that players will know what's coming next and be able to respond appropriately and quickly enough to get it right.

* The series can currently be bought in full on Xbox 360 or PS3.