You are here:
Tablets Reviews

The Element is best described as a solid, all-round tablet. It's thin and light enough to be carried around with ease, it runs full-fat Windows 8.1 so you needn't worry about program/app compatibility, and the hardware has most bases covered.

Schenker's IPS display is of course a key component, and the first impressions are good. The 1,280x800 resolution is admittedly basic, but it provides a 16:10 aspect ratio that in our opinion works better than 16:9. The display doesn't feel overly cramped in portrait mode, though we hasten to add that we still prefer the 4:3 ratio of Apple's iPad.

Viewing angles are very good in all directions, colour reproduction is consistent and both contrast and brightness are plentiful. The only obvious caveat is in outdoor use, where the panel's glossy finish can be overly reflective. Still, the criticisms here are few and far between, and the display is generally pleasant to use - it supports 10-point capacitive touch and never missed an input or gesture during testing. 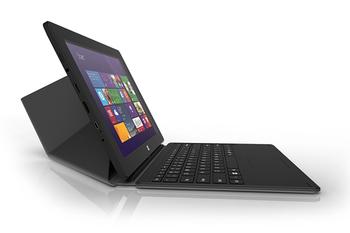 Sound output, too, is surprisingly decent. Schenker's stereo speakers provide plenty of output - a lack of volume can be a common complaint on tablets of this size - but there's a good amount of punch and while the audio is borderline tinny, it isn't entirely flat. It's just a shame the stereo speakers weren't spaced further apart - they're both on the left half of the tablet, which limits the stereo effect and makes it easy to cover both speakers inadvertently.

The Element's built-in components are ample for multimedia use, we feel, but to double as a productivity device it needs a physical keyboard. Schenker makes this available in the form a £29 Smart Cover that incorporates a chiclet keyboard and a small touchpad. Docking keyboard and tablet is made easy by a strong magnet and unmissable guides, but in practise the extra hardware will only get you so far. The keyboard's size makes it feel cramped to type on, while the trackpad has no physical buttons and is tap-to-left-click only. 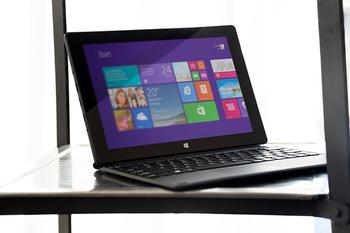 What's handy, however, is that the keyboard also doubles as a protective cover for the tablet, and the rear flap is designed to fold into a makeshift stand, as pictured above. It isn't particularly flexible - only one angle is available - but it's a useful function nonetheless. On the whole, we've come away feeling as though the Smart Cover doesn't do anything remarkable, but for £29, it does quite a lot of things reasonably well.

But the Element is a relatively low-cost solution, so there are trade-offs to be aware of. Firstly, the low-power innards deliver mixed results. Our PiFast benchmark is a good indication of CPU performance, and the Atom Z3735D returned a score of 99.7 seconds, which doesn't compare favourably alongside your typical desktop or laptop hardware. The 2.2W CPU, understandably, isn't particularly quick, and it's joined by a similarly-modest supporting cast - the 32GB of eMMC storage in our review sample managed average sequential read and write speeds of 131MB/s and 35MB/s, respectively, while memory bandwidth was measured at a very ordinary 9,000MB/s.

Put all this together and the tablet manages a lightweight system-wide score of 1,145 in the popular PCMark 8 benchmark, that's roughly half the performance of an Intel NUC mini-PC. Such numbers aren't necessarily deal breakers as the Element is able to run Windows 8.1 quite well - the OS is quick to load and feels sufficiently smooth during regular use - but attempt some heavy lifting and the limitations of the underlying hardware become clear. Everyday tasks such as word processing and web browsing are well-catered for, but try something more advanced and performance can become tedious. Even app-store games such as World Series Of Poker have a tendency to stutter badly. 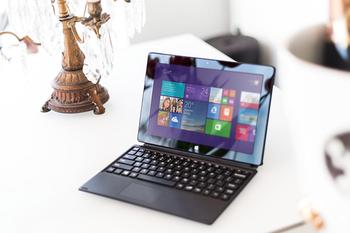 On the flip side, Schenker's choice of internal components allows the tablet to get a reasonable runtime out of the built-in battery. Our standard test entails looping a 720p movie clip with 50 per cent screen brightness and all wireless radios disabled, and in this scenario, the Element managed to keep going for seven-and-a-half hours. That's a couple of hours short of a modern-day iPad, but not a bad return for an Intel device running full-blown Windows.

And, perhaps more importantly, there's no fan noise to contend with. The underlying hardware is efficient enough to run passively cooled, and sure, the chassis can get warm to the touch under high load, but that's a sacrifice we're willing to make for a practically silent tablet experience.