Azza has written to HEXUS to announce that its Overdrive PC case is now available. Azza's Overdrive is a large (440 x 570 x 590mm) mostly open air PC case which is styled like a supercar engine. Furthermore, it features 'gull-wing' doors to aid cooling zones which house up to 2x 360mm radiators. Sadly, the doors do not seem to be motorised.

You can see the pictures, so you have a good grasp of whether you think this is an appealing design or an eyesore. While we are on the topic of appearances the design and construction is worth some discussion. The open frame targets water cooling enthusiasts, says Azza, and a lot of the design decisions seem to be linked closely to cooling. At the front you can see an oversized 200mm aRGB fan features for all the airflow you might need for the motherboard. 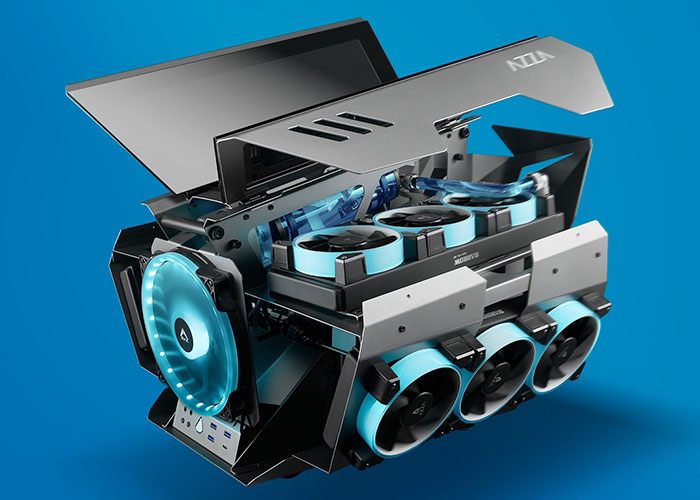 Looking up you can see the two wing sections. These hinged components are made of tempered glass and aluminium. The idea is that they can be opened to increase airflow / system performance, and lowered for "an aerodynamic look". In some example photos you can see double 360mm rads fitted under the wings, others show one side occupied by a graphics card. Overall, cooling options are plentiful with the top and sides capable of supporting "up to 3 x 360mm radiators and 9 x120mm fans, up to 2 x 400mm long GPUs, as well as a tall pump and reservoir combo".

Above you can see the official specs list of the Azza Overdrive. The max compatibility and cooling capacity of this 23kg case shouldn't surprise given its large size. You will probably not be surprised at the price either. In its email, Azza told HEXUS that the Overdrive is priced at US$599.99 and is available now. 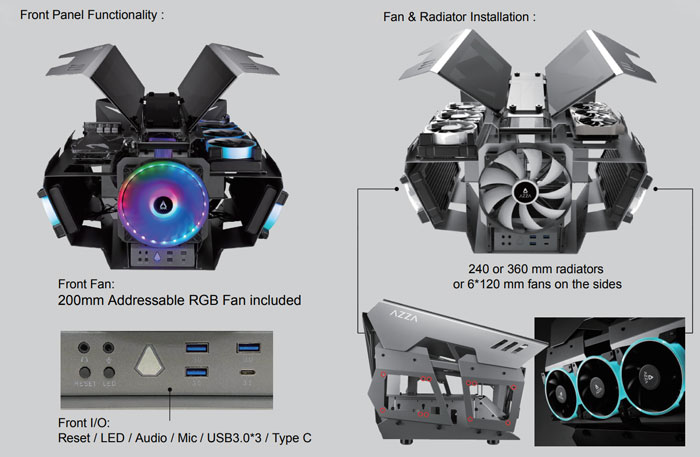 I mean, it's hardly penned by Giugiaro is it.
Posted by Ttaskmaster - Tue 27 Apr 2021 14:20
Didn't JayzTwoCents recently do a build just like this one?
ISTR he took a lightweight plastic 3D model of an engine block and bored out the space for all the components, with the rads in a similar layout to this.

Dust not a problem as you should be regularly dusting your PC out anyway, and there are plenty of open style cases that are popular.

Have to say, I like the concept. Looks like you can get 4 x 360 rads on there, and if those can do Push-Pull, I'd be absolutely delighted. It's one of the few times I can see RGB fans actually working for the design, though it'd still need additional illumination to complete the setup.

I'd certainly want to tweak the aesthetics quite a bit, and for that kind of money I'd expect a number of customisation options.
Posted by QuorTek - Tue 27 Apr 2021 15:05
These kind of gadgets I do find fun… and even with lightning in.. it is something different than a stupid case with random idiotic RGB lightning in that really serve no proper point.

Can I get it in V8 or V12 as well and maybe an oil cooled block too?