Researchers from the University of Southern California and the Paul Scherrer Institute (PSI) in Switzerland have developed a useful new semiconductor imaging technique. The new ptychographic X-ray laminography technique means that modern 3D designed computer chips can be reverse engineered or verified - non-destructively. 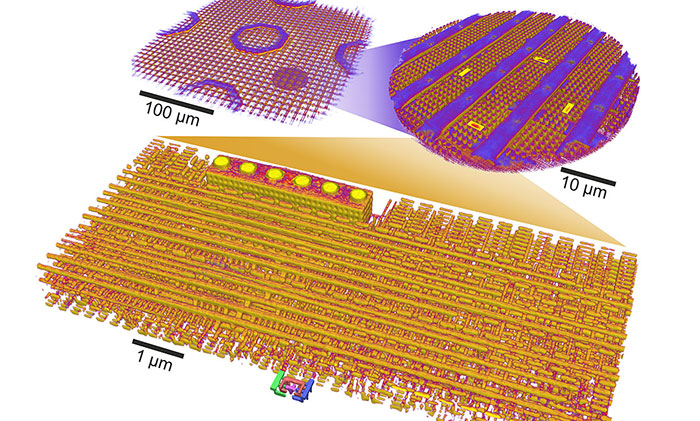 Previously 3D chips would need to be progressively ground down, cuts made, and then various imaging techniques applied in order to reverse engineer or verify its design. Now the US/Swiss research team's ptychographic X-ray laminography technique can image a chip without cutting into it. The chip will, however, need its surface to be polished down to 20 micro metres thickness.

After the chip surface is minimised an 3rd gen synchrotron X-ray beam is focussed at a 61 degree tilt and the chip rotates on a stage to reveal its inner construction. A lower resolution scan can complete in 30 hours but areas of interest can be scanned in an additional 60 hours - in enough detail to "identify the parts of an individual inverter circuit in a chip made using 16nm".

While it might seem slow right now, there are newer 4th gen X-ray machines in the pipeline which will be able to reduce the initial low res scan time to under an hour, for example. The researchers assert that over the next five or six years scan imaging time will be improved by 1,000 - 10,000 x speeds. Furthermore, the system will be able to comfortably handle 7nm parts, they assert, going down to 2nm in the future.

The new chip scanning system is seeing a lot of interest from US national security bodies. Of course such organisations will be not particularly interested in reverse engineering chips but rather be looking at deviations from design to manufacturing. They will be able to check for kill switches, hardware trojans and similar issues which may have been introduced to chips for nefarious purposes. Moreover, Anthony F. J. Levi, professor of electrical and computer engineering at USC explained that "You can identify the foundry, aspects of the design, who did the design. It's like a fingerprint".

65 QOTW: Have you managed to buy the upgrades you wanted?

Or are stock shortages getting in the way?

philehidiot
And allow the Chinese to rip off anything they like! Huzzah!

We know it's always happening in any market anywhere in the world. The Chinese just don't bother hiding it.
Posted by DevDrake - Tue 08 Oct 2019 17:59

philehidiot
And allow the Chinese to rip off anything they like! Huzzah!

Manufacturing anyway is happening in Asia mostly, AMD already has Chinneise company with their IP.
What do you think they need more ?

Actually i think we will only benefit from this technology on the long run - easier chip diagnostics = increasing yields + transparent security.
On the short - expect more CPU security flaws found.
Posted by Xlucine - Tue 08 Oct 2019 22:09

How would this be cost competitive with poking the chip with live wires and seeing if it turns on? I can maybe see this help investigate defects in the production line, but an hour in a fancy X-ray machine per chip (with the next gen Xray sources) AND all the compute to make sense of the reflections won't be cheap