Asus ROG launched the first GR8 'Console PC' back in the summer of 2014, with the device hitting retail the following October. Now it has launched the new VR-Ready GR8 II. This latest iteration of the GR8 can be configured with a choice of Intel Core i5 or i7 processor (Skylake and Kaby Lake options), and whatever the model you get a custom made Nvidia GeForce GTX1060 3GB GDDR5 graphics card is fitted. The system is a compact 4 litres in size, and weighs in at 4Kg (that's the same weight as 4 litres of water, fact fans).

It is claimed that the Asus ROG GR8 II is "the smallest VR-Ready system money can buy". Cooling considerations were at the forefront of designer minds with the GR8 II, says Asus, as they maximized the efficiency of the airflow, heat pipes and fans in the compact chassis. Even in this constrained space, Asus has created dedicated processor and graphics card chambers. We aren't given a full-tilt system noise figure but have been told it runs at 23dB when idle (and the system consumes <30W when idling). 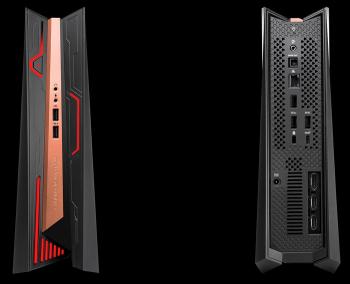 The new GR8 II has been used in extensive testing alongside an Oculus Rift system and games, says Asus. The twin HDMI and DP connectors allow users to keep their HMD connected as well as their monitor, for convenience. Other than for VR, Asus recommends the new GR8 II for living rooms, desks with limited space, and LAN party use. It further recommends the use of its own G-SYNC capable gaming monitors and Asus Aura peripherals such as keyboards and mice for an LED synchronised, aesthetically pleasing setup. 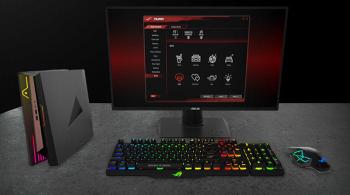 The Asus ROG GR8 II will be available in the UK from the first week in February 2017. It will be stocked at leading retailers, with an MSRP of £949.99 inc. VAT.

CAT-THE-FIFTH
“Asus customised GTX1060” - what does that mean??
I assume the system can take a normal sized PCI-E card as an upgrade?? Or is it some MXM card used??

Worse than that if my image search is accurate. Kitguru review v1:
http://www.kitguru.net/desktop-pc/leo-waldock/asus-republic-of-gamers-gr8-review/
Looks like a laptop/AiO type thing with no expansion aside from HDD, 2.5" HDD and RAM. One heatpipe cooling both the CPU and GPU.
Posted by jim - Wed 11 Jan 2017 15:43
The original GR8 was a laptop design as I recall. It even used two laptop-style power bricks to run it, which didn't look great.

Effectively, it's from the Steam machine way of thinking - i.e. a console for people who want to play PC games. In that regard, I think it's a really nice product, but obviously won't get much love on a forum where people build their own PCs!
Posted by scaryjim - Wed 11 Jan 2017 15:52

CAT-THE-FIFTH
… I assume the system can take a normal sized PCI-E card as an upgrade?? Or is it some MXM card used??

One look at the chassis pictures in the article should disavow you of that notion - there clearly isn't a standard expansion slot there. It's a micro-PC; it's not designed to be upgradable - as jim said, think of it more like a Windows 10 console: it's aimed at the majority of people who buy a PC, plug it in, then don't think about it for 5 years. It's definitely not aimed at the enthusiast crowd who love to tinker and upgrade.