We've seen all manner of weird and wonderful cooling systems in our time, but as far as usable consumer cooling goes, this might just take the cake. Digital Storm has just announced a new PC that manages to keep CPU temperatures below zero at idle and allow for a massive overclock in a truly exotic system.

The Hailstorm PC uses the snappily titled 'Sub-Zero Liquid Chilled System', which involves a series of thermoelectric cooling (TEC) peltier coolers to eliminate any heat, bringing the fluid temperature down to below 0°C. The advantage of this sort of cooler - as opposed to a phase-change system, for example - is that there are no moving parts, meaning that the components should be very reliable. Otherwise, the cooling system is fairly ordinary - if you can call something like this ordinary - and uses standard liquid-cooling parts. 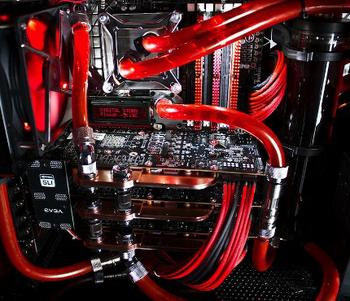 Of course, such low temperatures allow for some pretty amazing performance tuning. The top-end model comes with a hexa-core Intel Core i7 980X overclocked to an amazing 4.6GHz and three benchmark-destroying liquid-cooled NVIDIA GeForce GTX 580s in SLI. Of course, this is just the speed that the system ships at, and the manufacturer hints that there's even more headroom if you're willing to push it a little harder. 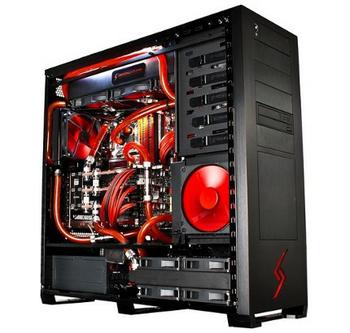 Posted by Tattysnuc - Wed 24 Nov 2010 08:01
I'd love to see a full review of this system, and the layout of their TEC cooling subsystem. Have just bought 8xwaterblocks and 4x138Watt Peltiers to start investigating their cooling capabilities…
Posted by kingpotnoodle - Wed 24 Nov 2010 11:49
Yikes, fling a window open it'll be hot in the room with this beast running!
Posted by Domestic_Ginger - Wed 24 Nov 2010 12:47
No idea what the dew point of water in room at 20c. I am fairly certain though you are going to start seeing condensation at 0C
Posted by GheeTsar - Wed 24 Nov 2010 12:53
Surely going below ambient temperature will result in condensation forming?
Posted by Hicks12 - Wed 24 Nov 2010 13:09
as always doesnt it just require insulated tubing, i presume DS isnt that silly!. If i had 5k that i had to spend and i had already bought more important things and that, this would defo be on the list! Just for the lols :P.

Not bad at all though tbf.