Gigabyte has shown off a completely new BRIX mini-PC at the Intel Developers Forum. As you can see from the video and pictures embedded below, the new BRIX towers over its earlier cousins and isn't really NUC-like anymore. However, thanks to the greater capacity on offer (2.6 litres), it can fit more powerful components such as a discrete Nvidia GPU. 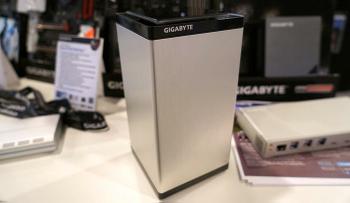 The Gigabyte BRIX Gaming UHD has the following key specifications: 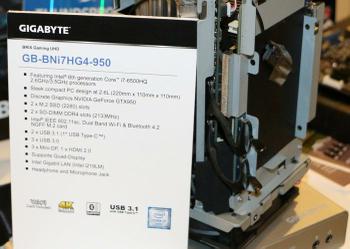 According to Mobile Geeks the GTX 950 is currently being used by Gigabyte as the machine was designed ahead of the availability of the GTX 1000 series of GPUs. It's not clear whether the GPU can be upgraded once you buy a BRIX Gaming UHD machine, I think it would depend upon Gigabyte providing the custom boards separately.

Legit Reviews has published an 'exclusive' about the BRIX Gaming UHD, showing off some details and pictures of this new BRIX. It says that the complete system as specified above would cost $1,300-ish. In some tests it carried out at the IDF the new BRIX machine ran pretty hot but never thermal throttled. However, the added thermal load of a GTX 1060 graphics might push its thermals over the edge, thinks Legit Reviews, so is an unlikely upgrade for the final product. The Gigabyte BRIX Gaming UHD will launch next month, according to Mobile Geeks. For further info PCPer has also published a writeup on the new BRIX from the IDF floor. 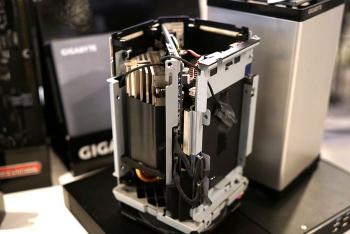