A Case, is a case right ?, how wrong can you be, I've been building computers for the last 3 years or so, and I've always gone for a basic generic case, they do the job, they hold all the bits together, there is a but coming here though, the generic cases feel cheap, they tend to use flimsy materials. On the whole you can see that they are a cheap case, and that's because they are, This case on the other hand just sort of exudes quality, the blow holes are neatly cut, everything fits together properly, the case sides are held on with plastic thumbscrews, so no need to get the screw driver out to get inside the case. Now that's wetted your appetite lets see what it looks like 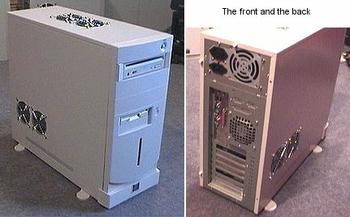 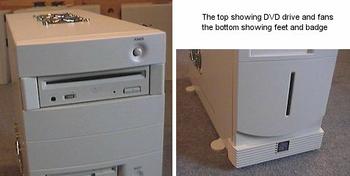 Well that's a few pictures, there really isn't that much you can say about a case, one thing that I could grumble about is the lack of an on off switch on the back of the power supply, this means if you overclock to far and your system won't boot that you have to hold the power button for 4 seconds or so before the system will power off, or if you forgot something vital I guess you have to just rip the power cable out the back of the PSU, so a switch would definitely make the case better, this maybe would not be an issue but with the Macron PSU in this case there was no on /off switch. One feature that you don't often get in budget cases is the slide out motherboard tray, this case has one as shown above in the pictures, this makes it very easy to swap heatsinks and get to the board to swap RAM and PCI cards, definitely a feature worth having (O:.

Something I didn't mention in my 1.4Ghz bundle review is the rounded IDE cables, they definitely look cool, but the main thing they do is to increase the clearance in the case for extra airflow, they do this very well, they are much more flexible than the regular ribbon cables and this allows you to position them where ever you want within the case, they are maybe a tad long for this case, but as they are so flexible that you can tuck them out of the way. If you've got cash to spare when you build your monster gaming rig then you can't go wrong with these, they help with the cooling, make the inside of you PC a lot neater, and they are easier to maneuver, they don't actually make the performance any different though, except for the extra bit of airflow and cooling that they may allow.

The buttons on the case are clearly marked to show what they do, and they're recessed below the surface of the case so that you can't accidentally hit the buttons and switch it off. The power button is on the top right of the case a little different to most power buttons but I suppose it makes sense in that most cases are either on the floor or under a desk so the button at the top mean, less bending and easier access.

I suppose the cosmetics of the case are as important, to computer users as the actual performance, the curved front panel certainly looks different to the majority of cases out there, I liked it, a bit different from the rest of the beige boxes out there. The space inside for the fans and the extra hard drive capacity was definitely a bonus compared with other cases I have used. When you assemble the case you get the option for 2 different floppy drive configurations, you can either have the normal front where the floppy drive sticks out the front or the other type where the floppy disc goes through a slot in the fascia, I'm not keen on slot loading it's a bit awkward to get your fingers in, but with this case you can choose which you want.

The fans did a very good job of keeping the case cool my system temperature with the 5 fans running never exceeded 21 degrees, the CPU was running at a rather fast 1466MHz so it obviously ran pretty hot, the Geforce 2 Ultra also gives off a fair bit of heat, The CPU never got over 42 degrees, this was with the FOP 38 heatsink on, the idle temperature dropped to within a few degrees of the system temp. Obviously case temp will alter with the ambient room temperature, but this case has enough air flow to keep the system as cool as possible.

To see just how much air the fans in the case move, I took one of the spare YS tech 80mm fans sealed a regular black bin bag around it, and the bag filled with air in around 20 seconds!! and there are 5 of these fans in the case, that makes by my calculations 15 bin bags per minute of air swirling round the case, that's an awful lot of air, this can only be a good thing with all those hot things in the case though (O:. The sound the case made was one thing that had worried me, but to be honest, its a lot quieter than a FOP38 fan, and there's just the general noise of a lot of air moving, the fans don't whine like the FOP38 fan. A nice powerful hum is probably the best way to describe it.

All in all I like this case, and if I was in the market for a case and I had the money to buy one I'd definitely consider it, the pre cut blow holes and fans are definitely a godsend for cooling, some people just don't have access to tools for cutting holes and fitting fans in cases, and even if you do have access you probably wont get the job looking as neat as the OcUK Tornado case. (o: