Decided on all-in-one liquid cooling for your next build? The next question is probably one of radiator size. Your choice may be dictated by chassis compatibility, but if you have the room and are aiming at the higher end of the market, it is typically a toss-up between a 280 or 360 form factor.

It is an interesting dilemma, as bigger doesn't automatically mean better. Strictly speaking, a 360mm radiator ought to offer greater surface area for improved heat dissipation, but the difference in size isn't huge, and fan configuration provides plenty more food for thought. Are dual 140mm fans preferred to a trio of 120s? Will noise output differ? And what's the deviation in price?

To shed some light, we're following up our review of Fractal Design's Celsius+ S28 Prisma by taking a closer look at its bigger brother, the Celsius+ S36 Prisma. Rather than cover the same ground, we'd encourage readers to revisit the original editorial for a more thorough overview of what the cooler has to offer. This subsequent review is more of a head-to-head contest.

That being the case, let's talk numbers. Starting with MSRP, the 280mm S28 Prisma retails at £190, while the larger 360mm S36 Prisma will set you back £220. Both are at the extreme end of all-in-one liquid cooler pricing, but the 16 per cent increase in cost nonetheless feels significant. Cost proved to be one of our criticisms of Fractal's flagship coolers, and it seems the manufacturer and/or retailers are responding; at the time of writing the S28 has been reduced to £156 at Scan Computers. No such discounts on the 360mm model as yet.

The S28 wins on pricing, and the contest is closer than you might think on the performance front. Both coolers make use of the same Asetek pump - whose 62mm main body and tinted glass lid look wonderfully sleek - leaving it up to the aluminium radiators and fans to set them apart. The S28 rad measures 143mm x 30mm x 324mm, compared to 123mm x 30mm x 403mm for the thinner-but-longer S36.

In terms of actual volume, the larger model sees a modest seven per cent increase, and it is in the fan department that we see arguably the largest discrepancies. 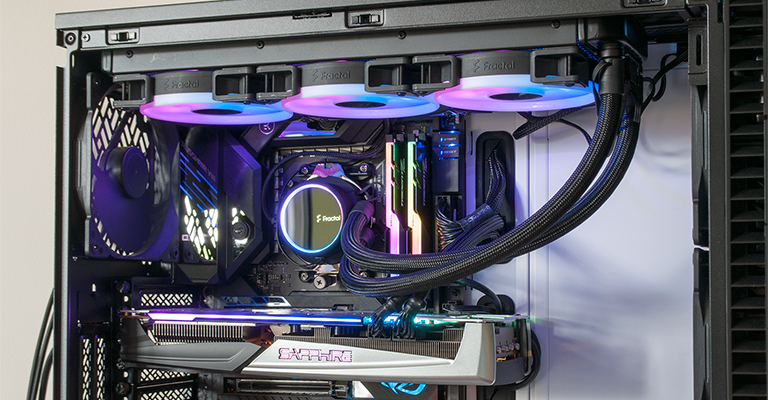 Looking beyond the raw numbers, there's also the small matter of personal preference. I happen to think two 140s look better than three 120s in our test platform - my OCD doesn't cope well with mixed fan sizes in the same build - and if you're fussy about cabling, two radiator fans are ultimately easier to manage than three.

All that aside, at the end of the day a CPU cooler is often appraised solely by its ability to shift heat. We've now had both models strapped to our 16-core Ryzen 9 3950X processor, so take a guess, which variant do you reckon will come out on top?